↓
Home→holiday→There was a soldier, a Scottish soldier Who wandered far away and soldiered far away

Our main holiday this year was in Scotland.   We had been invited by Ravi and Maggie to launch the Hossack Institute of Highland Studies in memory of Maggie’s parents.  So we decided to extend the holiday by staying in the Cairngorms National Park near to Tomintoul.

The drive to Inverness was uneventful, except for the police car parked on the motorway bridge with speed camera.  The speeding ticket has not arrived, so rekon I have got away with it.  That evening some of went out an ate the Great British Menu, curry.

The next day some site seeing.  Looked around Cawdor castle, the Clava Cairns and  Culloden where we whipped the Scots.

The evening was party night, where we met many of the Hossacks.

One more day in Inverness, the Sunday saw a few of us taking a boat trip on Loch Ness to Urquhart castle in the almost rain and then a good meal in a local restaurant converted from one of the many churches in Inverness that have fallen from use.  I might say a far better use of the premises.

Monday saw us heading to Tomintoul where we were to stay in a converted barn for the next 5 days.  When we tried to buy food, it was suggested the nearest place was Inverness.  Why had we not visited Tesco as we left Inverness?  During the 5 days we toad a steam train, walked around the Glenlivet estate, and tried some of the Speyside whiskies.

Finally we  traveled to Helensburgh  for a couple of nights.  The original intention was to stay with some ex colleagues (Mary and Ed) in a B&B owned by a women who had been a customer.  Alas she had to go to hospital, so Rosemary and I stayed in Helensburgh (Loch Lomand appeared full) for a couple of years.  I had stayed there in 1972 during the enterprise championships.

You may wonder about the pictures of the trees on the gallery, I took a picture of this tree in the exact same spot in 1972. 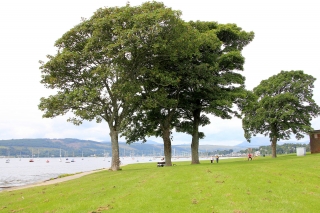