The morning was bright and sunny.  The forecast for the day was sunny, until the evening when some rain was predicted. Showered, then broke our fast, and headed off to the coast.  Our aim was to view a residence R’s cousin Agnes had bought in L’Escala. To make the trip more exciting, we headed of east towards the coast at Sant Jordi. A newish town with a multitude of new build Spanish flats for the tourists. Not our scene at all. Driving there was a bit up and downy as this part of the coast has high hills.  It also seemed every cyclist in Spain was out riding.  The first group was a women’s group spread out over several miles.

We headed south down the coast to El Port de la Selva at which point we headed inland and climbed up over the headland, almost reaching the height of an astronomical observatory.  On this climbing and twisty road, the Spanish cyclists appeared to be practising their hill climbs and descents.  I aimed not to fall over the precipitous edges of the roads or force cyclists over the edge. With the braking I hoped the discs would hold out, at MOT time it had been recommended that they be changed. But I want to consult our normal motor mechanic, not a VW dealership. We eventually dropped to the plain and followed the bay of Gulf of Roses around to L’Escala. 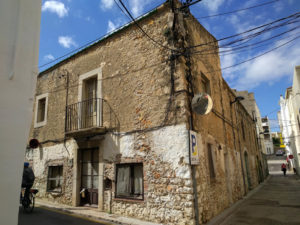 Arriving we headed down some imposingly narrow lanes, past Agnes’s house and to a car park where I grabbed the last space. Parking was free, a better deal than the Dali museum. Lunch beckoned, and we tried the French eatery, Restaurant La Gruta to find it was booked solid today, either that or we looked scruffy and they didn’t want us there, it seemed empty so looked like the second option.  So, around the block we tried Restaurant La Taglistella.  Nice restaurant, lovely entrees and then pasta main course.  You chose the sauce, and the pasta you wanted.  We left, the restaurant seemed busy and yes, the French restaurant was full, so maybe we were not refused for being unwelcome diners.

We viewed Agnes’s holiday home and tried to work out what she bought.  It is an old traditional building in L’Escala. Her home was on a corner of two extremely narrow streets, (All the streets in L’Escala were narrow, built before motor cars).  There is a tremendous amount of work needed to the house, (at least from the external appearance).  Inside I have now seen that it has a spectacular arched brick ceiling

After lunch we checked out the main beach harbour area.  There seemed to be music playing, paella being cooked and tables laid out across the beach.  Sat and watched for a while, listening to the man testing the speakers saying ‘Si, Si, Si’ over and over mixed with clonks and bangs.  No entertainment emanated from these speakers, but the other Saturday beach meal further across the little bay was in full progress with Spanish singing.   I did get excited when a rock riff was played, but alas nothing came of it. 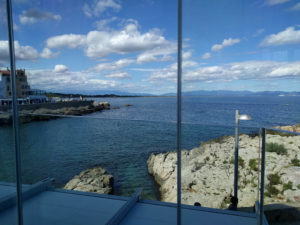 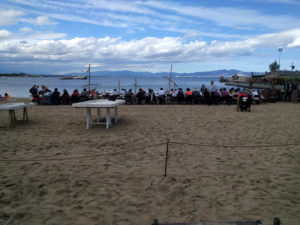 We decided to walk on down to the marina and admire a few yachts, decided it was too far and headed back to the car.  As we drove off the heavens opened, there was thunder and lightning, very very frightening.  The roads were flooded.  It was local because the North of the bay was still sunny.  When we came back to the road leading to the campsite turnoff, the girls were out in force for the Saturday afternoon clients.  It had not rained here at all.  Later after supper rain started but eventually dried up by midnight.