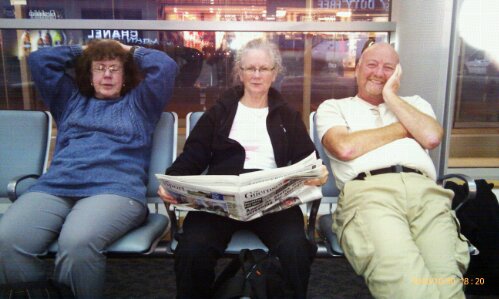 Sitting here in the airport after the end of our week holiday.
Last flight out of the airport, all very quiet now. Goodbye Guernsey, till next year.

Sorry for the lack of postings on here.  After a wonderful week in Guernsey with our own chef Gordon Curd, we are back in England to hear the sounds of fireworks.

Nice week, did plenty of walking and worked out in the Gym with Carol Ramsey.

We walked most days on the island, didn’t get over to Herm, bad weather conditions.  Had plenty of alcohol, used most of my years allowance.

Went for our usual week to the Grande Mare hotel on Guernsey.  Again we chose to use the bus for transport around the island.

Some good meals in the hotel and at the Auberge.

Some strong winds and rough seas, but not as bad as those on the South coast of England.

The health spa was open for us at no charge this year.  Think its on our maintenance bill though.

We are back from a week in Guernsey, staying at Le Grande Mare.  On this visit we decided to forgo the car, and use the public bus service.  This had several advantages, cost a lot less, allowed us to drink in restaurants, and meant we did not have to do circular walks, or retrace our footsteps.

The weather started out reasonably fine, midweek there was one day when there was rain all day, and another day when we were caught out and had to don our waterproofs.  We did quite a lot of walking, walking the Southern cliffs, and the Northern coast.

We also visited quite a few restaurants, taking advantage of the October TennerFest promotion on the island.  Many restaurants vie to produce a two or three course menu for lunch or dinner for 10 pounds.  You can then vote for your favourite restaurant and the winner gets some award.  We still think Da Nellos was great Italian food, and the No 44 Indian Restaurant next door did some really unusual good Indian food.  We ate three times at Le Grande Mare, and that was excellent too, much improved over when we first visited several years ago.  The Hollows a Greek restaurant at La Gouffre was a bit of a disappointment this year.

There seems to be the usual closed streets where the drains, or pipes are being replaced.  The new airport terminal, which was started last year, is nearing completion and looks quite smart.  The Royal Bank of Scotland has a fabulous new building under construction on the harbour front at St Peter Port, along with many new open and closed market flats.

Most museums were open until the 31st of October, so we did the round of those we had not recently visited.

Just got back from a holiday on the island of Guernsey. Flew out on Saturday morning the day before the storm struck the UK. Sunday was fun standing on the cliffs leaning into the hard wind, and driving the car along the North coast road being covered with sea spray. A few fences blew down around the hotel.

The rest of the week was peaceful, and warm. Did several walks and generally ended up walking in tee shirts.

Visited Herm where Rosemary picked up lots of shells. This was one day when the sun never shone, it was very misty, but warm. Even the top of Herm was out of sight, and there was no way you could see Guernsey from Herm. This was a short visit to Herm, out on the 8.30 boat and back on the 12.35. Wanted lunch and did not really fancy fried Scampi, so we rushed back and over to the Auberge restaurant which is South of St. Peters Port. Lovely views if the weather was clear.

Most days we ate out at least once. This was usually lunch. Food seems much better then it was ten years ago. Maybe it is because we go to better restaurants. The Grande Mare Hotel, where we stay though was a lot better then it was ten years ago food wise. We used to be disappointed when we ate there, but now they seem to do some really decent meals. The last lunch we had had at the hotel was excellent value, and very good for a three course meal in the Islands Tennerfest initiative. This Tennerfest initiative runs during October and the first part of November. Participating restaurants produce lunchtime meals for ten pounds. Generally they are pretty good quality and value.

Friday was the one bad day when it drizzled all day. We really did not do much other than have a swim in the pool and lunch at the hotel. You need these wet lazy days.