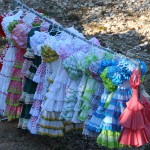 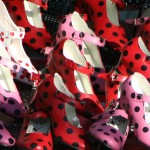 Today was our last full day in Spain.  Once the menagerie had been sorted out we headed into Jalon for the rastro (aka flea) market.  The market was one large car boot sale along the river bank and the riverside car parks.  A large mix of market stalls, selling goods from Flamenco dresses & shoes, through skimpy panties & anatomy covers (red ones said to be luck on Christmas Eve), records to any old junk. 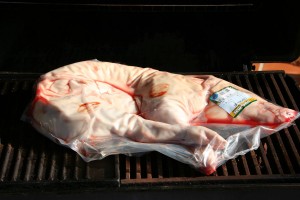 Before heading back to the house, a coffee at the Halleluiah bar, and a quick visit to Mas y Mas to buy the evening snack type meal.  Whilst there Steve spotted half a piglet for 25 euro. Carol was taken by this and bought one as an incentive for John to come back and BBQ it.

Quick release of the dogs and cats, then we were back down to Calpe to eat at one of the restaurants on the harbour front.  Today it was definitely tee shirt weather; so sitting outside was a pleasure.  First choosing the restaurant is quite difficult, there is quite a high-pressure sales force pressing you to enter their restaurant, ours plied you with free Sangria and fish cakes.  We went for the inclusive menu, which was a starter, main course and half a bottle of wine for under 10 Euro.  Rosemary chose battered artichoke (she’d half thought it might be buttered), Carol and Steve had 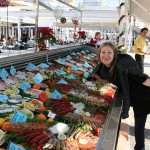 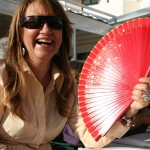 Only slight problem with the restaurant was the continual visits of the watch, sunglass, belt and purse sales people.  They did make a rather rapid retreat when a policeman appeared.  We watched some Spanish girls try on glasses, inspect the bags and so on.  The one girl attempted to teach the others how to use a fan.

After the meal, we walked down the promenade looking for the mermaids in the rock, Chris had told us 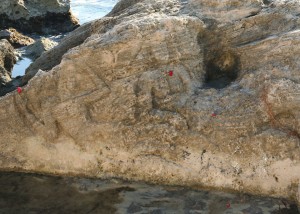 about.  The man of the party ably spotted these again.  Top score for the observation power of man.  Women probably are chatting too much to see anything.

A quick stop of for tea in a local sea front café; proper Tetley tea, and hot, but then it was run by an English women.

Supper, sausages, that’s Sausages, not Walls.  And just for those you look back at this biographical log, a couple of mean eyed cats. 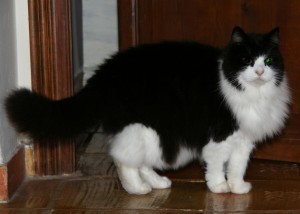 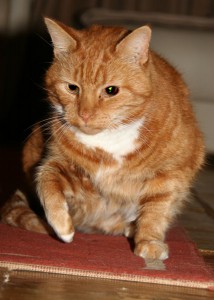 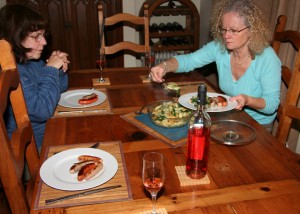 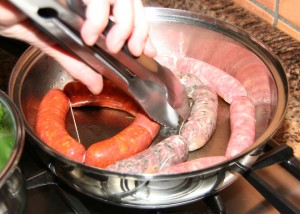 Today we drove to Alicante airport and dropped John off.  He was having to flying back to England after his mother’s great friend had died very unexpectedly leaving us and Carol. 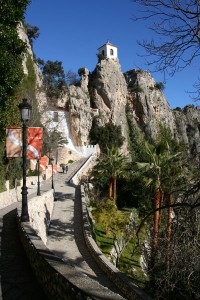 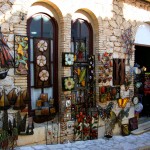 On the way back we (ie Carol) negotiated a number of roundabouts out of Benidorm at La Nucia on the way to Guadalest.

Guadalest is a hill top fort and village with wonderful views down the valley towards Benidorm.  It’s a pretty village, a bit touristy, but still well worth the visit.   Beneath the village there is a man made lake.  I do wish the Spanish in these towns spent a little more money trying to hide away their power cables and TV aerials.  There was one street, which looked quite nice, except for the plethora of cables. 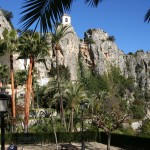 Back home again for a late lunch on the terrace in sunshine.  R&C did a spot of gardening until it turned chilly. 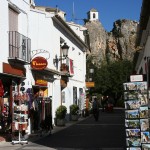 Another sunny day, even slightly warm & no one complaining of leg ache.  John & Carol’s friends Barry & Irene popped in en route to southern Spain in their camper van. 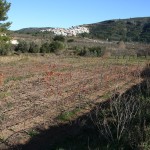 Today we took it easy and went for a wine tasting at a boutique winery in the valley. This was arranged by Chris & Yvonne from Jalon who came with us.  A German Peter Arnold and his English wife Helen ran it.  He was an experienced winemaker, having worked in Germany for 10 years, 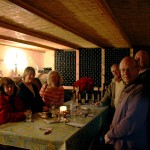 and then created a new winery in South Africa where he worked for 12 years.

His winery had a very small vineyard of Shiraz, capable of producing 600 bottles.  Most of his wine production was from bought-in grapes from the area.  We tried several wines, a Rosado, three red wines and two whites, and eat some very good tapas.

On the way home, we stopped off and filled up our water bottles from a spring nearby.  The idea was to go back to Chris & Yvonne’s for coffee, 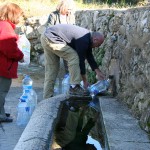 so we were a tad perplexed when they weren’t back when we (after our spring diversion) arrived.  Seems a local ex-Pat taxi driver had not managed to stop when they did.  We tore ourselves away from them and Scamp the dog and went home via the supermarket.

Back at the ranch Chef-prepared another Paella, this time with chicken & prawns; yummy. 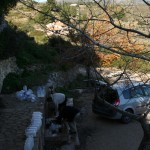 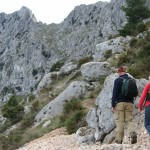 Today was a lovely bright sunny day.  So time for a walk, this was a circular walk around a ridge of rock called The Bernia.  The Bernia overlooks the resorts of Altea and Benidorm, you get an excellent view of the ridge from the N70 motorway.  The walk is 8km and graded medium-high, has quite a bit of scrambling and walking on scree slopes.  For one reason or the other (ie Rosemary) it took us 5 hours and not the estimated 3.5 hours.

The walk starts up from a car park by a café and goes up a rough track passable by cars.  Off the track are several remote houses, and even the odd British caravan parked on a plot of land.  At the head of the track is a spring (water) filling station.  Seems the Spanish are into drinking natural spring water from the hills.  Here was a Brit, and an Austrian filling up their car with numerous 5 litre containers of water. 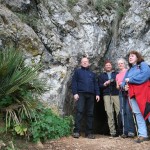 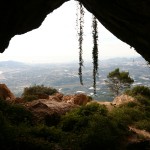 From now on the walk went into a narrow path, going up the hill until it reached the rock face.  Here we walked under the ridge slowly up the slope, clambering up quite a few steep patches, and even having to use the occasional assistance of ‘hands’.  At the North edge of The Bernia you take a natural tunnel under the rock face.  This tunnel is about 30 yards in length, and three feet high.  Passing through the tunnel, downwards, you enter out into a large cave overlooking the coast, Altea and Benidorm.  Short stop for our packed lunch, drink of water and Robin feed.  Despite the lovely day, the conditions were rather too hazy to get good pictures of Benidorm. 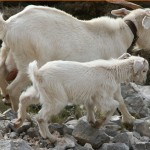 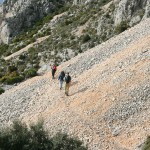 The walk now headed South West under the cliffs of The Bernia.  This part of the walk was mainly on the level, OK first going down hill a little and then up hill so that we could cross over The Bernia at the far end.  Some parts were a little tricky, again having occasionally to use the hands, crossing short scree slopes.  The Spanish also have a tendency to mark the path well where it was obvious, and then forget to mark it where the route divided into several possible tracks.

On the way we met one other walker walking the route in the opposite direction, who spoke to us in French and mysteriously suggested I slow down.  There was a herd of goats half way along the track, including two babies. 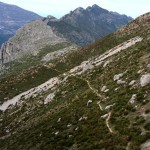 At the far end of The Bernia was a fort, a Bastion.  The fort still had a few intact arches.  Here the walk became easier as we crossed over the ridge, and then headed back down to meet up with our car. 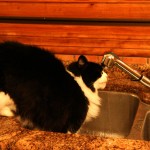 Back at the Villa, Chef prepared a lovely chicken dish with some of the largest chicken breasts we 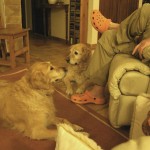 have ever seen.  Later in the evening we were entertained by one of the cats, Jake, drinking water out of the tap.