Sunday 8th saw me head into London on a train from Bicester.  Normally my mode of transport is through Aylesbury.  Bicester is nearer and has a more frequent service, just that it’s a tad more expensive.  I have to admit the non stop service was nice, though the Victor Meldrew in me took exception to all the loud iPods playing around me in what was meant to be the quiet carriage.

Arrived and headed over to the British Film Institute to meet the other Sad Gits.  A special reunion in honour of Jon Lewis who was passing through from South Africa. 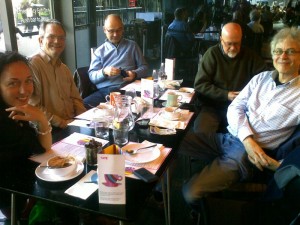 A quick drink, and then there was the call for lunch.  One pub ignored because it was totally crowded.  A good call was made not to eat on  the terrace.  Minutes later it started to rain.

Instead we went to the Tate Modern and ate in the downstairs cafe.  Decision making is not a feature of Cambridge graduates, trying to get a decision on the number of bottles of wine was rather painful, Andrea came to the rescue, the only non Cambridge graduate amongst us. 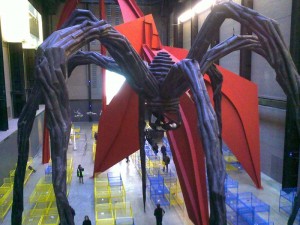 A quick tour of the gallery, and a walk across the millenium bridge and then it was goodbye as we wended our way home.

The walk across the bridge is always a spectacular walk, especially with the dramatic skyscapes we had on that Sunday.

I had another appointment in the evening, and went to a GMB union fund raising event at the Poetry Society in Covent Garden.  Here I was entertained to some poetry readings.  Decided to cut this short as Rosemary was due to pick me up from the Station, and I had a 5.00 early morning rise the next day. 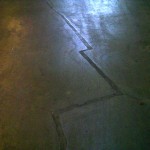 The Crack, this is what happened to it.

On a final note, I have added an image of The Tate Modern’s crack.  This was a Tate Modern Turbine hall exhibition where a huge crack was created in the floor.  I always wondered what happened to it.

I am meant to be going to Iran to do some work for a customer. Presently Visas seem to be an issue. First my 3 month application for a visa was rejected, and now my 3 day visa was rejected. It looks like I will have to wait a few more weeks before reapplying.

This is such a shame, the people I met and worked with in Iran a few years ago were very nice and helpful people. I do hope this can all be sorted out quickley.