Saturday arrived, and the sun was up, the tent was soon unbearably hot, so had to unzip the doors.  Eventually got up, made coffee and some bacon butties.  The topic of conversation with the neighbours was the death of Michael Jackson.  Quick browse on the Internet confirmed the news and the weather forecast for the day. Off then to find a loo without huge queues.  Some closed as they were about to overflow and needed to be pumped out.  Water was also a problem, as peak times the pressure is so low.

Today I decided to commit myself to one stage and that was the Pyramid stage.  So armed with my camping seat I headed off to the Pyramid, and set myself up just behind the path which crosses in front of it.

The first band I got to see were the Eagles of Death Metal, followed on by Spinal Tap.  With these two bands I relaxed back in the sun, drinking the odd pint of Gales Festival Brew. 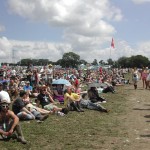 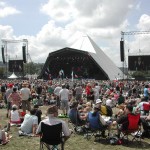 Saturday at the Pyramid 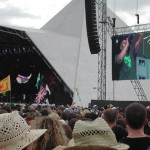 At 4.00, it was then some rap from Dizzee Rascal.  Now I am not really a rapper, but I do admit this was not too bad, there were some highlights, especially the tributes to Michael Jackson who had only just died.

It was one of those mysteries, as I walked about the previous evening, all these people you come up to you and shout, Michael Jackson is dead. It took a while before I believed the story, it could have been one of those rumours that a few people could have started, and which would then spread like wildfire. 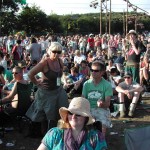 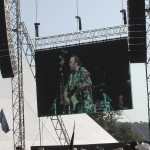 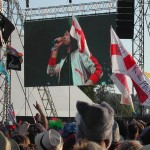 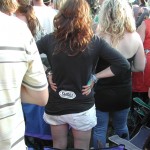 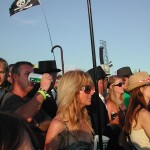 After Dizzee Rascal, we were back to the old timers, with Crosby Stills and Nash.  They went through so many more songs that I recognised, it was a real walk back down memory lane

Now a band I had never heard of called Kasabian came on.  Quick text to Selina to find out what I should expect.  Turned out to have a few songs you could dance and sing along too.  Great stuff. 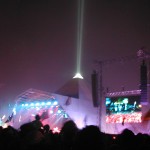 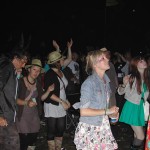 Finally at 10.00 Bruce Springsteen and the E band came on.  He performed for 2 hours and 40 minutes, never stopping at any time.  He not only sings well, but must be fantastically fit.  One image sticks in my mind, Bruce standing there in the cold air, lights behind him steaming away in his sweat.  One or two of the youngsters with attention defecit thought he was on for too long.  And no “Born in the USA”.

Ah well all good things come to an end, made my way back stopping off for a green Thai curry.

Thursday had ended with a few showers and the odd flash of lightening.  Friday I was awoken at 4.00am by the persistent sound of falling rain, which went on until 10:00.  I had to move stuff around the tent; it didn’t seem quite so waterproof these days.  At the sound of the rain easing, I was up and out in my underpants making a spectacle of my self in front of my neighbours.  Then it was on to making bacon baps and coffee, and chatting to my neighbours, the three girls who had materialised  in a tent next door overnight.

The grass outside was wet, and no sign of the Glastonbury mud on the campsite.  Still boots on today, and waterproofs would probably be good insurance. I walked over to the Pyramid Stage through quite a bit of mud.  Wet fields and thousands of footsteps; always result in the generation of mud.  As one compere over in the Circus Field said, stop walking about, come in and sit down, you are only making it worse for yourselves.

First stop for the day at Bjorn Again on the Pyramid Stage, where I had an excellent sing along to Abba’s greatest hits.

Most of the bands after Bjorn Again I had not heard of, so decided to try something a little different.  Went to the Circus Field and got drawn into a tent with rush matting by

the comper who had said, stop walking about, come in and sit down, yeou are only making it worse for yourselves.  Oh and it had started to piss down with rain as well. Spent over an hour or so listening to a couple of shows which were mixtures of comedy and circus act.  The themes were juggling on top of monocycles, and getting the audience to participate in one way or another.

Moved on to the large tent, The Astrolabe in Glebeland Arena for an audience participation show by Jonathan Kay where eventually we were persuaded to go on stage, and were trained to sing and do basically silly things.  This was the training and indoctrination part of the show, because we were next taken into the outside world (it had stopped raining) and as a group had to accost strangers and act oddly.  Yes we went to one

stage which was warming up for a gig, cheered and appeared as a big audience to a small band, and when we where acknowledged we all walked off to target someone else.   This time some poor targets at a coffee shop received our attention.  Yes we walked around as a co-ordinated team, singing, forcing others to sing and participate in stupid antics, forcing the mounted police to walk down our funnel of people.

When not having a specific target we walked around doing emu impressions.  Amazingly, a substantial part of the team stayed together for this hour of audience brainwashing.

Walked on up the hill and to the bar by the acoustic stage and cinema, and participated in a well-rewarded drink and then something to eat.  Had something somewhere to eat and then tried to walk from the other stage to

the pyramid stage, and got stuck entirely as two groups of people walking in opposite directions tend to do.  I was aiming to see The Specials play.  Managed to make it there through the people and the mud in time to see the second song.   Afterwards it was Neil Young, but decided to see the Blockheads play over in Avalon.  Stopped by the Jazz Stage to pick up some grub.  Decided on some Arab food, chicken cooked in some kind of crust.

Made it to the Avalon Stage with time to spare, but first popped into Trash

City.  It was open and looked fantastic, with robot creatures, flame jets synced to the music.  It looked like some futuristic set from a scifi film.  Harrison Ford would not have looked out of place.  Really should have stayed, but the Blockheads at Glastonbury 2009 were calling.  Listened to all the classic hits, “Hit me with your rhythm stick”, “Reasons to be cheerful, part 3” and “My name is Trevor”.  Enjoyable.  The reason why

I had to see the Blockheads was because Ian Dury was going to play Glastonbury the last time I went, back in 1999, and alas he never made it because of ill health, and he died the year after.

Back to the tent, against the tide of humanity who were exiting the main stages for the delights of the night clubs of Trash City, Avalon , Arcadia and Shangri-La.

I set off from home on Thursday.  Tent, sleeping bag, chair and food packed into the back of the car, along with sack barrow from Jewsons to cart the stuff to the campsite.  I drove around Bristol, down the M5 and through Glastonbury arriving at Pilton after midday.  The only hold up was being stuck behind a German registered coach.  The roads other than that were completely empty.  Was the festival happening?

For some reason only known to the organisers, I was parked seemingly miles from the entrance. Sack barrow loaded with the provisions, and then the mile or so walk to entrance number D.  Walked past acres of fields empty of cars.  These were totally full when I left the festival.  Slight mishap on the walk, the barrow decided to lose one of its wheels.  No problem, quick walk back and offending clip was found and refitted. 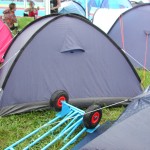 Through gate D, tagged with wristband and then a search for a camping pitch.  Seems everyone had already turned up on the opening day Wednesday.  Not many spaces were available.  Heard from others that the queues into the site had been horrendous.  Eventually camped in the Dairy Ground just south of the hedge that separates the area from the Paines Ground.  I found what seemed to be quite a reasonable space, to which a resident neighbour said, we wondered when that would be filled.  As is usual a couple more tents found their way into that space over the rest of the day, and one was even erected early in the morning while I slept.

Tent set up, and then a walk around the festival arena.  First visit was a walk to Green Fields and the Stone Circle where the weirdoes hang out,  the way led past the Other Stage, where Selina and I had camped in the long past.  This camping area in view of the stage was now let out to stallholders.

Green Fields and the Stone Circle were quite restful, with some hand bongo drummers disturbing the peace in the centre of the circle.  Back down the hill, and walked to the east to check out the areas of Arcadia and Trash City,  Trash City looked really interesting, not yet open, men working on the props with welding equipment.  Looked forward to coming back there and seeing it when it was open.

Into the main shopping area, picked up a vegetarian curry for a late lunch, and then a walk up through the circus area, and to the cinema and acoustic tent.  A quick pint of beer, lots of real ale on offer at this festival, along with the petroleum tankers of larger and cider.

I walked back on down to the Pyramid Stage and then on home to my tent. 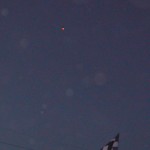 Here I got to know my neighbours, a couple from Birmingham way in a tent that you could stand up in.  While sitting there enjoying the late evening, a nearby tent started launching model hot air balloons. The second launch was not a success, the balloon caught fire and landed on a nearby tent causing a little bit of damage.

Night came, so another walk around the nightlife of the festival, heading over to Trash City.  Alas this place was not yet open.  The whole place was really buzzing in expectation, but not a lot quite yet happening.