Rosemary and I enjoyed the annual weekend away organised by the Berkshire Branch of the Cambridge Society.  The weekend was in Carmarthenshire from May 16 to May 18.  We met up with our friends at the Dolaucothi Gold Mines, old Roman workings, more modern Victorian workings and the 30’s mine. We took a tour through the old workings.  On the way to the hotel we stopped off at Talley Abbey, a ruin. I managed to capture a reasonable image of a Nuthatch feeding its young in a small crevice in the ruin.

The evening was spent in the Cawdor Hotel in Llandeilo.  The rooms were recently modernised, alas ours was a bit on the small size.  The food was very good, and they even had draft real ale on tap.  That is almost a first for a hotel.

Saturday we walked through some beautiful woods to Dinefwr Castle and then on to Newton House.  Dinefwr was the original castle, which was left to decay after Newton House had been constructed.  Some reasonable photographs of nest building Housemartins.  After lunch we walked back to the hotel for our cars and travelled to The National Botanic Garden of Wales. This is the newest Botanic Garden in the UK, and was funded by the Millenium project. The site is based on Middleton Hall with many of the old gardens being recreated.  The Great Glasshouse forms the centerpiece and was built where the old house used to be.  This garden was a highlight of the trip, we really needed more time,  there were areas we did not visit. I look forward to the trust raising money to reconstruct some old lakes.  The  glass house was used in the making of the Dr Who series ‘The Waters of Mars‘

Back at the hotel, another lovely meal accompanied by Welsh Harp music.

Sunday another garden, this time Aberglasney Gardens, another smaller but spectacular garden.  All these gardens looked so fresh, and the  blue skies definitely made them look their best.  A good snack lunch and then on to the Gwili Heritage Steam Railway, where we had a ride up the track and back.

It was a great weekend. 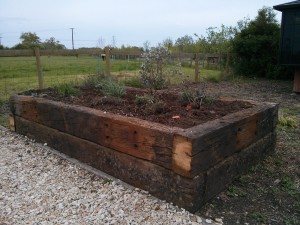 The raised bed herb garden has now been constructed on the site of the ex Willow tree.  It is made of 6 railway sleepers and 30 barrow loads of earth and compost. The project has been on my to-do list for several years. The earth / compost was from several years of composting garden refuse.  It has been planted with Chives, Rosemary, Marjoram, Thyme and  Bay. Not sure the rabbits have yet appreciated this project, their home under and in the compost heap has been dug into.  They though may come to appreciate the tasty leaves as the herb project matures.