My first visit to Aylesbury’s Waterside Theatre.  Selina had bought Rosemary, Phil & me tickets to see “The Curious Incident Of The Dog In The Nighttime”, a play about an autistic teenager.   The staging of it was fantastic.  A black box, with a grid pattern and lights at the grid intersections which indicated a houses, or furniture, or a tube station. Very, very clever. It took me a while to understand what the plot was, never having read the book (both girls had, of course). All I had heard was a mention of Sherlock Holmes, so I was wondering when Sherlock would arrive, or was this a great detective story?  My problem had been a quick google of the title only without reading even a synopsis.

“The Curious Incident of the Dog in the NightTime” is a 2003 mystery novel by British writer Mark Haddon. Its title quotes the fictional detective Sherlock Holmes in Arthur Conan Doyle’s 1892 short story “Silver Blaze”.

Think I missed the word title in the above quote when I read it.

As a first time visitor to the Waterside Theater I was quite impressed.

Wonder what it will be like when it’s rearranged for the King Crimson concert I am going to on the 31st August (without Rosemary).

Rosemary and I visited London for the day.  Caught the 9.00am into London.  The weather was kind, sunny, ideal for doing some grockling.  We were visiting the Sherlock Holmes Museum, Royal Institute of British Architects, The Museum of London and The London Transport Museum,

We started off by walking to Baker Street to view the Sherlock Homes Museum.  (It’s not quite at 221B, but near enough though.) The museum is a private one and is basically a house which has been decorated in the fashion of Sherlock Holmes house, but with imaginative objects (such as severed ears) from the stories and some waxworks.  Rosemary thought it all very cute & well done. 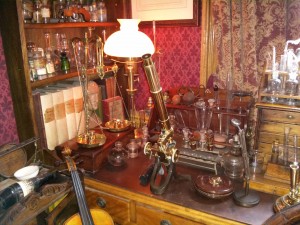 Chemistry at the Sherlock Holmes Museum 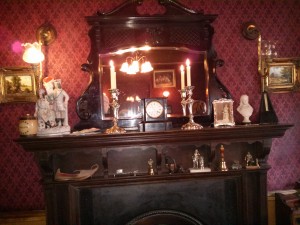 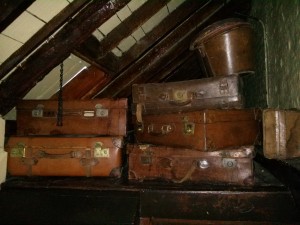 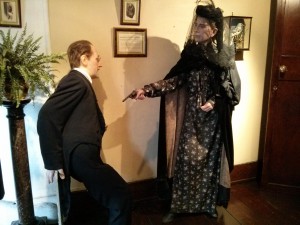 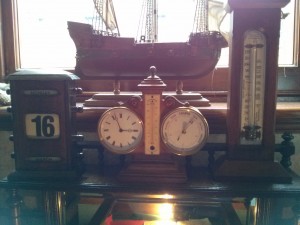 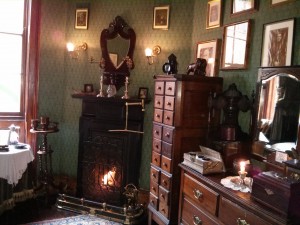 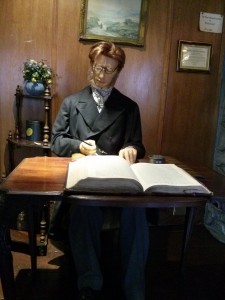 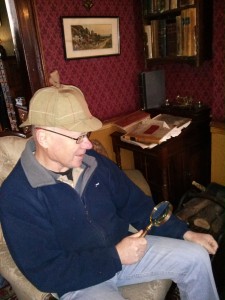 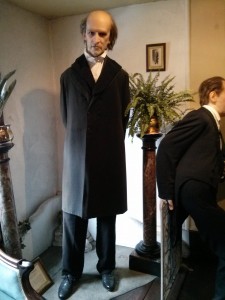 Next, one tube stop to Portland Road, and the Royal Institute of British Architects to see the exhibition on Charles Rennie Mackintosh.  This exhibition was about his architecture and not his other work.  There were numerous plans and drawings of buildings he designed.  Some built and others not.   We have been and visited some of them, from the Glasgow School of Art, to The Hill House he build in Helensburgh.

We then tried to see a Forensics exhibition at the Welcome Collection.  Unfortunately, it was not open on a Monday.  Instead we headed across the road to Drummond Street for a lunchtime veggie buffet curry at Diwana Bhel Puri House.  For under 7 quid you get an all you can eat buffet, including a sweet.  There are so many unusual flavours, colours and foods to choose from.  It’s now my favourite restaurant.   Near by is also a camera shop, Calumet (Now WEX), where we paid a short visit and came away with Canon EF 100mm f2.8L Macro IS USM Lens.  Made the lunch rather expensive after all. [Ed. I am told the proximity of the camera shop was unknown before the outing. My other leg has bells on it.]

Next over to the city, getting out at Bank (mobile phone navigation is a God send), we made our way to the Museum of London to see their exhibition of Sherlock Holmes. This was a large exhibition, started of with masses of TV screens showing clips of the many Sherlock Holmes films and TV series.  We were able to see videos of the many the actors who have played Sherlock and Holmes, from the 1920s to Benedict Cumberbatch.

The exhibition also featured many pictures and drawings, some with little relevance to Sherlock Holmes, other than a picture of London Bridge in the smog. There were several like that, including one by Monet.  The exhibition improved again with more objects associated with Holmes. 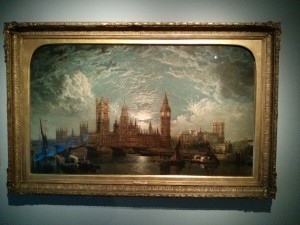 This was a picture depicting Sherlock Holmes London. I loved the illumination in the clouds.

Final museum was the London Transport Museum in Covent Garden.  Here they have the history of London Transport, from horse drawn carriages (including Sherlock’s beloved Hansom Cab), horse drawn buses,  the start of the rail network, the underground and the buses. Thankfully they did not have a Ken Livingstone bendy bus.  You had the chance to drive a Central Line tube emulator.  Love to know how they managed to move some of  the vehicles to their resting places in the museum.  There were some lovely 1930 taxis on display.  Very relevant as there is an owner of a similar taxi in our village. 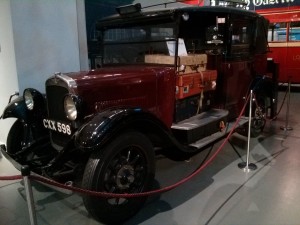