The other day we had been out for a drink in Quainton with our friends.  Alas we have to travel now that the local pub is closed, and the next in walking distance, the Crooked Billet, serves a not very good pint of real ale.  Anyway I digress, we decided to have an Indian takeaway for supper.  Quick phone call to order our food from my mobile phone (yes, I have the local Indian takeaway phone number in my mobile, along with lots of other useful numbers).  Stopped off at the said local, Chadnis in Waddesdon, on the way home and picked up Rosemary’s Chicken Byriani and my Chicken Vindaloo.

Back home I started to eat my Vindaloo, normally I am disapointed by these curries.  They are meant to be hot, and generally I can’t taste any heat in them, and don’t break out in a sweat. Yes I like hot, hot food. Chadnis Vindaloo is a different kettle of curry.  It was hot, very very hot. I sweated,  and I had chilli burn, I was almost defeated, but not quite.

So if you want a good hot Vindaloo, you should not be at all disapointed by our local Waddesdon offering.

Easter started off with a BBQ on Friday evening. How hard is it to buy charcoal at this time of year? Tesco was saying there will be none in stock for another 2 weeks.

Slow roasted English lamb shoulder was cooked for almost 8 hours on the BBQ, then shredded and mixed with pomegranate seeds and mint leaves and served with a salad of skinned peppers and feta cheese. We had some friends around, who all stayed the night, and again it seems we and our friends drank rather too much alcohol. Gordon Brown would not be at all pleased with us. Some wag on the radio said there would be two types of activities in the future, mandatory and banned. 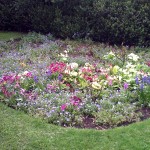 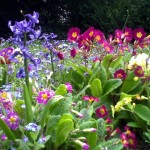 Sunday had a meal with my Aunt and Uncle in Warwickshire, yes again it was lamb, but this time English leg of lamb, and slow roasted.  Their garden was beginning to look lovely with lots of blooms.

There was also a lot of food walking around on two and four legs, the four legged varieties which have to be fenced out of the vegetable patch, but seem to find a way in.

The two legged variety were seeking refuge from the woods on the other side of the field.  M said how the shooters who stood in the field, fired at the pheasants as they were driven out of the wood.  When they missed, they turned and fired at the birds towards M&D’s house, often with shot hitting their windows.  Not dangerous, but an annoyance non the less. 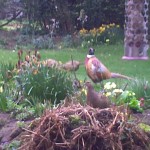 Monday was a lovely day, Rosemary spent most of the day at Ludgershall village auction. This is an auction held once a year, and is used to raise money for the village hall. It though is a proper auction with proper items, some selling for several hundreds of pounds, not any old junk. She came away with another rug for the house.

A visit to the office in Gateshead for the start of year meetings.  Anouncements on the new bonus plans and targets.

Main event though was the evening meal in Newcastle.  Have to admit to feeling slightly hung-over the next day.

Travelled to Birmingham a couple of times this week.  Monday and Tuesday I was installing some new software at the offices of One Stop.  They are a small supermarket chain.