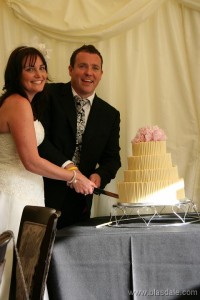 On the 30th May 2009, Edwina and James held a party for their friends and relatives to celebrate their marriage.  Rosemary and I attended, and I took a few photographs to supplement the professional photographer’s.

Rosemary was doing an ad hoc check of the field, when she spied some odd activity and so got the binoculars out.    It looked like a large bird of prey was eating a late breakfast.

A few minutes later, large bird had gone but something remained….. the breakfast?  Surely not a lamb?  Rosemary went out to investigate and found, amidst some feathers, a buzzard, lying on his back, looking near death but with his stomach still going up & down.  His eyes were open but his head looked at an odd angle and a bit bloody.  He didn’t respond to her shadow over him.  Fearing the worst, she went back to phone the RSPCA for advice.  Several phone calls later, she awaited a call from them and went to check up  on the patient.  This time he looked brighter and moved his head and opened his beak.  She assured him help was on its way and went back to the house wondering how to pick him up (to take him to the vet) without hurting him and without making contact with his beak.

But wait, Miles & his mum were in  the pick-up in the field checking on their sheep.  They paused by the bird.  Rosemary shot out.  “I dispatched him,” said Miles.  Oh goodness, thought R.  “He’d got himself cast, so we righted him with my stick,” said his mum, Annie. Ah! breathed R with relief.  “I didn’t realize that could happen to a large bird,” she babbled to Miles.  “Well how do you get up if you’re stuck on your back?” asked Miles.  He had a very good point.  Everyone decided the buzzard probably flew into a nearby powerline and stunned himself on impact.

R phoned the RSPCA to tell them to cancel the call and the lady on their helpline was also surprised to hear buzzards can get themselves cast.

So now we all know it’s not just sheep that need righting, keep your eyes open and binoculars & stick handy.