I had a night away in Bradford, yes the early get up, the rush to Stevenage and train to Leeds, then on to Bradford.  At least I can get a couple of hours sleep on the train. 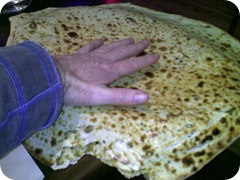 In the evening I did manage to get out and have a curry.  The first suggested curry house was rejected, lack of beers.  So Mike chose Omahs, a balti house, again dry, but what the hell, it was 9.00pm and we were hungry.

Started off with a mixed grill for a starters.  When I had finished eating that, a feeling of surfeit was already on the horizon.  Imagine my surprise at the Nan bread which accompanied my balti curry.  I was informed it was a small Nan. I should not have been surprised, on the door was a challenge, if you could eat one of their large Nans, then you could go away with £50.

We left having eaten well, leaving behind a substantial portion of food, all for £25.  Next week I will be a little more careful on choosing the quantities.

It’s been a busy week using up my carbon credits; up before six to catch the Easyjet to Edinburgh to start a project with my favourite client.  I was back in their office in Dundas Street where I had started consulting for them more than six years ago.  The office has been renovated and was very smart, with a great canteen.

Evening I tried the Mussel and Steak on Grassmarket, where I had a memorable steak, and some red wine to wash it down.

I had forgotten all the hills in Edinburgh, and my recent sedentary life caused a certain stiffness to the legs in the two days I was there.

I definitely feel retirement coming on.  Hopefully less travelling next week, or at least not having to rise so early in the morning.

Wednesday produced another inch of snow during the day.  Not a nice day, always overcast, few photo opportunities.  As evening came, the sky started to clear and the mercury plummeted.  I have not seen minus 10 for many years.  The wood burner definitely had to be run a little higher last night to keep the house warm.

This morning Rosemary went to work, she did have to walk the last few hundred yards. Steve attempted to go to work, but failed the steep hill out of the drive onto the main road.  So yet again he is WFH in this ski clothes.  Given a chance the camera may be aired.

Yesterday it started to snow at around five in the afternoon.  Today we have six inches of snow, measured with a ruler and measured in several places on flat hard ground away from walls.  This is not a Blasdale exaggeration, so no need to divide by 2.  Nice fluffy snow because the temperature is still below freezing.

I hope the sun will come out so I can get some nice photographs, but for the moment here are some I have taken. 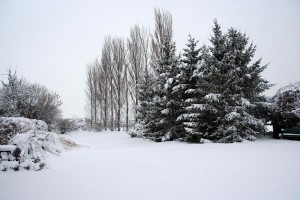 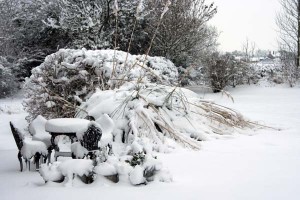 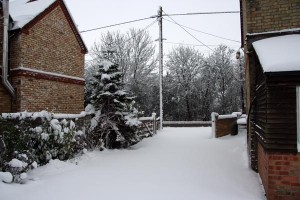 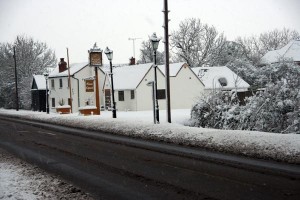 Plough and Anchor, Kingswood, Buckinghamshire on the 6th January 2010 after overnight snow fall of 6 inches.

The 90th Birthday Celebrations for Rosemary’s mum, Win, held in The Wigeon Room, Titchfield Haven Visitor Centr.  New picture album of the festivities have been added.