This Saturday we went to Gonville and Caius college for our annual lunch.  This is given to the alumni who contribute some unknown minimum contribution to the college endowment.  This endowment funds the fees of current students attending the university.  At these events those who have given significant sums are mentioned, for instance the  Caian who has placed bestowed his London house, now worth £3.5 million, or the Chinese parents of a student donating a half million to the boat club house funds.  What is known is the menu of  higher donations will get you, a meal with Stephen Hawking (£50,000 better get on this list soon, he must be nearing his use by date), your name engraved into the Benefactors’ Wall in the Great Gate (£1,000,000), portrait hung on the staircase to the College Library (£2,500,000)  Full details of Caius donations are listed here.  There is so much temptation to piss off your heirs and leave all to your  alma mater  (Selina, I am only joking, she raises money from the opposition alumni)

Anyway, we had a great lunch with the usual  lovely grub prepared by the Caius team headed up by the chef who obviously enjoys his own food and we have nick named Ratatouille, the large chef, Gusteau, from the film Ratatouille.  The crab was excellent.  As usual we met up with Andrea and Richard and Chris.  There though does seem to be a noticeable dearth of people from ’72 who try and assuage their guilt of free tuition and student grants 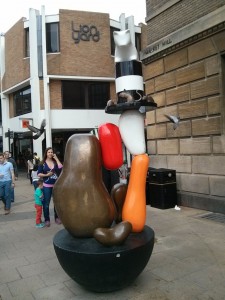 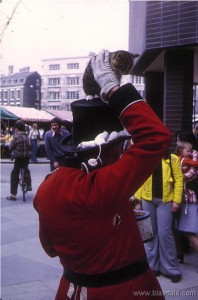 Now the point of this post, Snowy Farr (Yes he has a wikipedia entry, so famous). While walking around the market place, I saw this rather naff sculpture which had been placed there.  There was no plaque, nothing nearby to describe what the sculpture was for.  For those who had met Snowy Farr is was obvious what the sculpture was about.  Why the secrecy, what was the council hiding, they paid £50,000 for the sculpture, are they embarrassed by it.  Many feel they should be.  There was much criticism that the sculpture was a waste of money, that Snowy would be rolling in his grave, the money could have gone to the causes he collected for.  A lone few said he would appreciate the humor of the sculpture.  Then there was the build quality.  The sculpture was supposed to be maintenance free, but within months it was stained with rust and grime, though those issues had been corrected when i set eyes on it.  Ah well, he was a Cambridge character, who was there when I was at university and I remember him fondly.  I am glad the Cambridge Council honored his name with this sculpture.  To some extent it needs only to exist for the time those who remember him visit the marketplace. 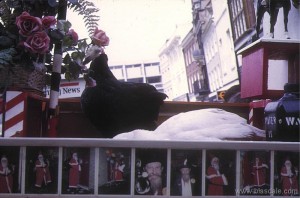 Snowy Farr raised money for charity.  He was a vegetarian, grew all the food he needed on an allotment,  walked into Cambridge to raise money for charity with his menagerie of animals.  He was a regular eccentric always to be seen in market square.  There is an excellent video recording of an interview with Dave Allen. 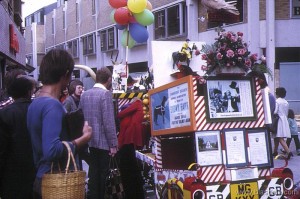 On Friday 30th May we spent a weekend away in Ely, Eating, Drinking, Singing and being generally festive.  More information, galleries and utube videos are in the gallery here – Indian Classical Music in Ely and Ravi, Emma joint celebration