Very early morning rise to catch our flight to Sydney. The airport bus arrived on-time and we were soon checked in. All baggage and hand luggage checked.

At Sydney, hand luggage checked again, and Rosemary small pair of scissors from her Swisscard were confiscated. I got scanned for explosives residue. The next flight was to Singapore where we had to get off and back on again. Here R lost another pokey thing from the same gadget. The security at Singapore was dire, and so slow. It must have taken well over an hour to board the passengers.

The long haul now to Heathrow where we arrived early in the morning, quickly through passport control and then baggage. (Last bag off?) Smooth bus trip to Lucknor, where Kiera and Neil were waiting for us. But odd to see spring flowers and new leaves. 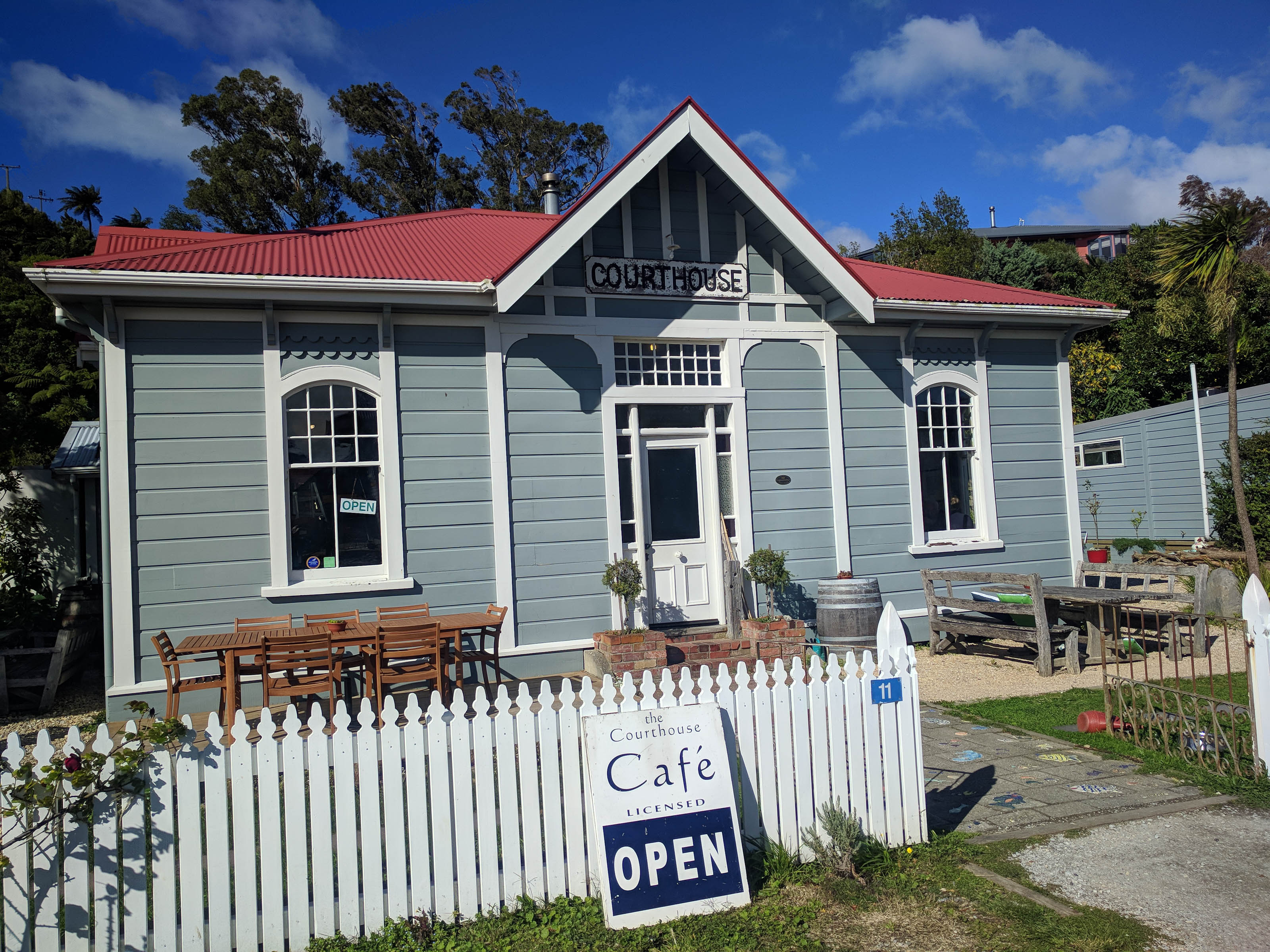 Today we locked up the bach as we weren’t coming back and headed over to Collingwood. On the way we passed Peter and Nic’s old properties where we saw the present owners were still harvesting olives and selling olive oil on the roadside.

In Collingwood we stopped at the old Courthouse, now a café, for coffee. The café was busy for seemingly a small place out of season.

The Collingwood beach had an array of driftwood wigwams built at the high-water mark.

Back to Takaka where we looked around the shops. Lovely furniture in one shop made from the roots of driftwood trees with glass table tops. I would love one of those at home. There was a group of South African singers who were touring. They presented an impromptu busking in the market place to build up some support for their performance. We took a look in the local art centre where local artists exhibit. Some pretty good photographs from a young photographer.

For lunch we ate at the Wholemeal Café. Huge busy café.

Now it was back in the car to Nelson and over the hill again. The traffic lights were now working, and were green for us all the way through.  Packed our bags and left for Nelson airport where we flew to Auckland for the night. We stayed at the Holiday Inn, used the airport bus to get to the hotel. Embarrassment as I had to get the driver off the bus to help me purchase the ticket. Seems I was placing the credit card into the machine upside down. Had a final meal in the hotel.

Today we drove to Golden Bay in Peter’s Mini. Nic stayed behind because she was working and our visit was only for the night. The drive is along the only road to Golden Bay up, over a mountain and down the other side. This road had been badly damaged during a cyclone with parts of it washed away. There were long sections of one-way where we had to wait for our turn. Traffic controls were being installed, and they seemed to be concreted in, so looks like they will be there for the long term.

At Peter’s bach, the removal lorry soon arrived, and furniture was quickly unloaded. Beds were erected so there was somewhere to sleep for the night. Heating /cooling was also tested. Peter’s bach is in easy walking of several restaurants and bars.

We drove along the coast to The Abel Tasmin park and parked at Tata beach. This is also a DOC camping site and looks well worth staying at if we were here again. The beach is a huge long sandy beach coloured Golden. Going back we took a look at the Abel Tasmin monument which is due to be upgraded with commemoration to the Maori side added to it.

We then drove into Takaka for a meal at the Roots bar. Several ales on tap and a great menu to choose from. No band was playing tonight, but you could see they often had people playing there. Takaka appeared lively, and a shop selling vinyl and other items appeared to be a meeting place for many. 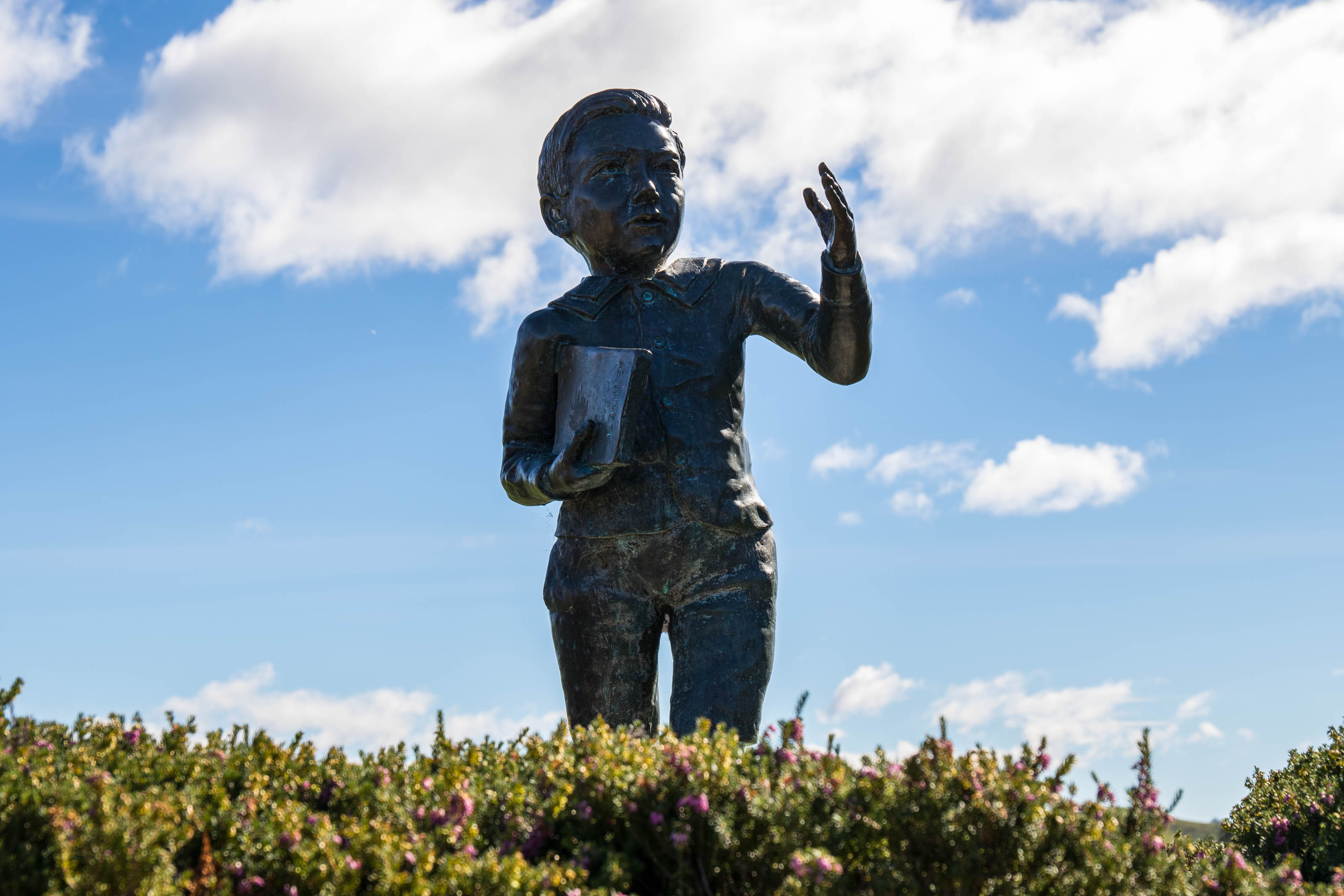 We said goodbye to Betsy who was off to Christchurch on the bus from Nelson.

We went out to visit the Rutherford birth place in Brightwater. (We had been past there on the 26th, but had failed to stop.) On the way, we saw the interesting spectacle of a house been driven down the road. We had been told that they do this, often at night, but here we actually saw one being transported during the day. We even saw water coming out of the plumbing as they jacked up the side of the trailer to pass over some parked cars. Some of the street signs in the middle of the road are just popped into sockets and so were easily removed to allow the house around a roundabout.

In the evening we went to Isel park to dog walk. It is in Stoke, has some magnificent trees. There were stalls selling food drinks  etc. This evening there was a magnificent sun set over Nelson.

We were sleeping in the garden sleep-out. Casper the Rag Doll cat visited us, coming in through the cat flap, and proceeded to purr loudly and attempt to force himself to get between our heads. A great cat. [Ed’s note: since returning, we learnt with horror that he was run over and killed in the cul-de-sac. A very sad & unnecessary end to his life.] 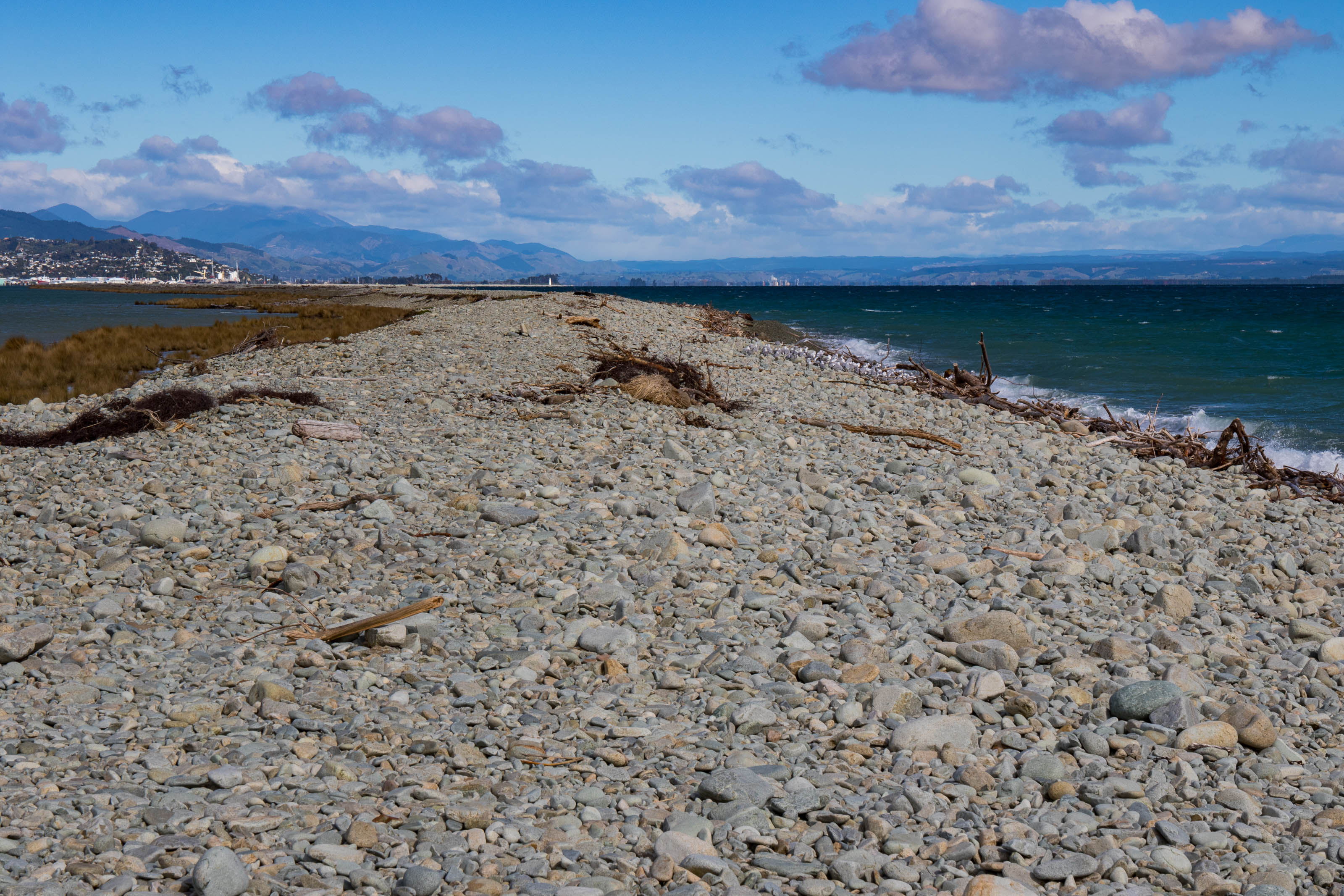 Today, another lovely day. Dogs walked on the local beach, and then a drive through Nelson and onwards along the coast. First stop was the sewage site, this happens to be the land connection of the shingle bank. The shingle bank is some 13 km long, shingle is a misnomer, more a boulder and stone bank.

Next stop was Cable Bay, named Cable Bay because this was where the undersea Telegraph lines originally landed. Pete had wanted to try the café there, but it had closed for the Winter. Instead we stopped off at Cable Bay Adventure park for lunch and to feed the eels. The Park runs quad bike events, has a huge Skywire ride. We contented ourselves with feeding the “pet” eels.

Next stop on the tour was the cemetery, where we stopped to look at the monument put up for the miners who had been murdered. The inscription says: This monument was erected by public subscription in memory of five late residents of the province of Marlborough who are interred here. They were waylaid, robbed and barbarously murdered by a gang of four bushrangers on the Maunoatapu mountain, in this province, June 12 and 13 1866. The cemetery was fascinating with areas designated for burial by faith.

Next stop were the Japanese Gardens before we arrived home.

Supper was at the Free House Pub where we sampled several beers. The Pub had a large selection of beers to try.  We also ate there, sending Nichola out to the Indian restaurant across the street. The meal duly arrived in the pub. The pub supplied plates & cutlery. When he had finished the pub cleared away the remains. Interesting concept, designed to keep you there drinking more beer.