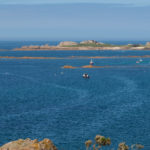 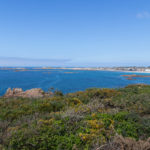 We had planned to go to Herm Island today.  The weather, though dry, was not sunny.  Thursday according to the weather gurus was likely to be better.  So, instead we lounged around the campsite reading books, drinking tea and making lunch. We went for a short walk around the campsite looking at the sheep, chickens, turkeys, pigs and ducks.  The turkeys had chicks, the very protective mother was most concerned as we stood by.  They were protected in a cage on the field because if they weren’t, the gulls would come in for a quick meal.  The pigs were all rare breeds with a couple of Old Spot (and others I have no idea of now).  We missed two piglets but we saw them later when we came back from our afternoon walk.

Enough lounging about was enough, so off we went for a walk to Cobo Bay trying to keep to green lanes and the ruettes tranquilles.  We arrived and had tea at one of the famous Guernsey Kiosks, the Cobo Bay one, with me further treating myself to a Classic Magnum as we left.

The walk back took us a different, slightly shorter route which passed two Island fortifications we have never seen before.  Both were not marked on our Guernsey maps.  Maybe we should update to a newer version. They are obviously proud of these fortifications with the new signs and historical notes. 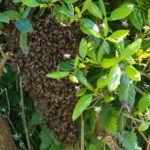 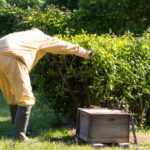 Arrived back at the campsite to what looked like a swarm of midges which must have been awakened by the warmth and sunshine appearing during our walk.  We decided on a bottle of cold, local cider (6%) brewed not more than a few hundred yards from away.   Nope they were not midges, they were  Guernsey Honeybees doing their swarming bit. (Perhaps from the apple orchard making our cider?)  The owner of the orchard was contacted and arrived, donned his kit and captured the honeybees, placing them in a box.  Quite exciting.  One of the campsite’s two young Border Collies managed to get a bee entangled in her tail and was quite subdued & anxious until the insect was found and removed.