I was invited, with guest (so thought I should take Rosemary), to the Gonville and Caius Commemoration of Benefactors. This took place on Sunday 14th November. Because of the likelihood of flowing wine we decided to stay the night. Our first choice of the Camping and Caravan club was stymied cos they were closed. We also thought of the Caravan and Camping club which was open, but the location was not good for public transport.

So we opted for an hotel, choosing Graduate Cambridge because of its free parking and the easy walk into Caius. It used to be the Double Tree by Hilton. On the site of the Double Tree, there used to be the Garden House Hotel which was destroyed by a fire on 23 April 1972 in which two guests died and before that it was The Garden House where a riot took place in 1970. Protesters against the Greek Junta, the “Colonels’ regime”, gathered outside the hotels for several days, culminating with a crowd of several hundred – mostly Cambridge University students organised by socialist groups – demonstrating against a Greek dinner for 120 guests being held in the River Suite at the Hotel from 7:30 pm on 13 February.

The company behind the Graduate operates hotels in university cities, mainly in America. The Graduate Cambridge and the Randolph in Oxford are the only two hotels they operate in the UK. The Cambridge hotel has been completely revamped, with excellent WIFI speeds far excelling mine at home. The reception area is themed with bookcases, books & college crests. The hotel has one downside – long meandering corridors which go on and on forever.

We arrived in the afternoon, got dressed in our glad rags and walked over to Gonville and Caius for four o’clock. The events of the celebration were:

We had a lovely time starting with tea, and an excellent, thought provoking lecture on “Freedom & Free Speech”, mainly in universities. The Caius Choir performed well. The historic (1631) sermon, “Death’s Duel” by John Donne, seemed a tad sombre & bizarre, but fascinating at the same time. The reception flowed with drink and noise in the Senior Combination rooms, where the Feast provided excellent, beautifully presented food (from the newly refurbished kitchens) matched with equally splendid wines.

We ate breakfast at the hotel the next morning, after a quick walk around town, but were rather underwhelmed with the experience. Rosemary’s egg benedict had a hard yolk, soggy toast was served & luke-warm coffee! (No idea why we didn’t say anything.) You can get a better full English at any Joe’s Café.

The COVID pandemic had put paid to many events, last year and this year. One of the annual events was the Gonville and Caius Benefactors Day. We had missed a few, not just through COVID, but also because it clashes with the Download Music Festival. This year Caius held the Day, not in June, but in September.

We decided to attend, and to stay in Cambridge for the week. We pitched up at the Cambridge Camping and Caravan site pitch in Trumpington, on Friday 10th September, leaving again on Friday 17th. Cambridge was full of graduates attending their degree ceremonies. These had been held over from 2020. There were crowds of people standing in the street outside the Senate House. Privacy seems important these days, the railings had been covered to stop people gawking at the graduates and their families on the lawn.

The Caius Benefactors Day was on a lovely sunny Saturday afternoon. We walked in early but did not have to queue, quickly finding the waiters and the wine supplies. Lunch was good. We conversed with several different people, none from my year. There was a talk from the Master, an exhibition in the library & an organ recital. A few days later we entered Caius again. Not very welcome, the porter was not keen and told us to be quick, and not to enter any buildings other than the Chapel.

During the rest of the week, we visited the Botanic Gardens on a beautiful sunny day, eating lunch at the café. Another day was spent at the Sedgewick Museum of Earth Sciences, and the Whipple Museum of the History of Science. Of course we had coffee at St Michael’s Cafe and some wine outside the Cambridge Wine Merchants (they sell Ricard!).

Nearer the campsite we walked over to Hobson’s Park Bird Reserve, a nature reserve surrounded by the Cambridge Biomedical Campus, Addenbrookes Road and new housing in Trumpington. The bird reserve is made purposefully difficult to get near with ditches and earth works. There was a useless hide; willow trees in front were blocking any view of the birds. I think the lake was full of geese, we could hear them from the campsite, leaving and arriving at dusk and dawn.

The weather was mainly good, except for the day we travelled to Saffron Walden. That Tuesday it rained most of the day. We were soaked through waiting for the bus. Saffron Waldron had a rather deserted market, which packed up while we were there. A good Turkish lunch time meal at Meze By Night. At one stage, R thought her legs might fall off cos they were so wet & heavy. I queried whether she meant her trousers, but she said she wasn’t sure. We did manage to visit the Fry Gallery, but it was in a temporary location, so few Ravilious paintings on show. Only one, I think.

We visited Cambridge, specifically to attend a lecture to celebrate 150 Years of Periodic Table given by Dr Wothers, as part of Cambridge Science Week. This was aimed at children (but I fancied the explosions as well) and the intention was to generate interest in science, so we took Julian, Phil and Selina.

Stopped by Caius College to show Julian where I had spent three years. Showed him the stone commemorating the life of Stephen Hawking place outside Professor Hawking’s college room, we also saw the double helix floor engraving celebrating Francis Crick and James Watson.

Lunch at The Copper Kettle and then we walked onto the the Chemistry Laboratory to attend the lecture.

To celebrate my birthday, we decided to spend a couple of nights in our Campervan in Cambridge. Our first stop was in St Neots, parking on the Bedfordshire side of the river Ouse where we had a coffee at the Ambience Café. Rather an insipid Cappuccino.  On then to Cambridge where we were camping at Cambridge Camping and Caravan Club Site in Trumpington. It is well served by buses running during the day every 15 minutes, and in the evening, one an hour until quite late.

We were soon into Cambridge and visited the Fitzwilliam Museum. Rosemary wanted to see a Virginia Woolf exhibition. Unfortunately, the exhibition was not what she wanted. R had failed to read the small print, “An exhibition inspired by her writings” Next, a stop at the Eagle for a beer. We drank in the bar at the back, which is very much themed on American airmen. The walls are covered with signatures and dedications. Next stop was dinner. We chose the Cambridge Chop House and had a good meal. The Chop House is mainly underground. Its basement extends under several of its neighbouring businesses.

Back then to Emmanuel Street to catch the bus back to the campsite.

On Wednesday, after an al fresco breakfast, we again caught the bus into Cambridge, admiring the new Medical research building around Addenbrooke’s Hospital, and the new student flats near the rail hub. Once in Cambridge we had a walk around Caius College, and even visited the LNB (Late Night Bar). No longer the LNB, now a bike shed. The porter knew it had been the LNB.

We then walked on to Kettles Yard which reopened this year after some modifications. An exhibition of Richard Pousette-Dart work was on show. He was a key figure of Abstract Expressionism. Jim Ede, creator of Kettle’s Yard, first met Pousette-Dart in New York in 1940. Of course, we visited the house of Jim Ede, which continues to surprise & delight.

We now walked along side Jesus Green, Midsummer Common and the river, looking at the canal boats and Cambridge Boat Houses. The canal boats appeared to be stocked up with coal for the winter. Spotted the new Gonville and Cauis Boat House, well Google maps did.  Back across Midsummer Common and down King Street. I was telling Rosemary about the King Street Run, and oddly we met a Cambridge graduate several days later wearing a King Street Run tie. The basic objective drinking a pint of ale in seven of the street’s pubs before returning for an eighth in the pub you started. One of the club rules state a penalty pint is awarded for the commission of either of the two Ps, “peeing or puking”. Successful members of the club wore a special navy blue tie decorated with the image of a tankard surmounted by a crown. This tie is also decorated with a ‘P’ for each penalty pint drunk. The tie soon became a highly sought-after item of apparel.

Finally, a pint at the Anchor, overlooking the mill pond, then the University Museum of Zoology where we had a few minutes before chucking out time. Ah well on to the Eagle for another drink before going for my Birthday treat at  the Loch Fyne Restaurant. Yes Rosemary embarrassed my by having a candle placed in my dessert. Then it was back on the bus to the campsite.

Our final day, Thursday, started with a lovely bright morning with a slight frost, but we’d been snug. We visited Grantchester and the Orchard Tea Garden. Another bright and sunny day encouraged us to walk down to the river and admire a couple of punts moored up. You can see where Roger Waters from Pink Floyd found their inspiration for the song ‘Granchester Meadows’.

This weekend Rosemary and I attended the Ruby reunion of the 1972 Matriculation year of Gonville and Caius.  We decided to make a weekend of the event, and arrived on Saturday.  Went for a punt on the River Cam, heading towards Granchester.  Stopped for lunch at Granchester Meadows, checked the GPS and decided we were only half way to the pubs, so headed back.  Examining my hand, I see I have a blister now.  There was one dastardly man who was challenged by a group on the bank.

You are punting from the wrong end of the punt, Sir.

Ah, I come from the other place he replied.

Supper was in a Thai restaurant near to Harvey Court / Stephen Hawkins building where we were staying for the night.  Afraid is was OK, not excellent.

The Sunday was spent meeting those Ruby alumni, first for coffee in the Stephen Hawking building, then at lunch in the old buildings.  We had a tour of the library where there appeared to be some embarrassing  memorabilia.  The Junior Common Room comment book, and the college directory for our year. 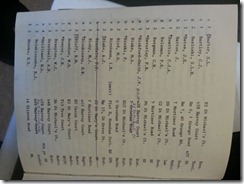 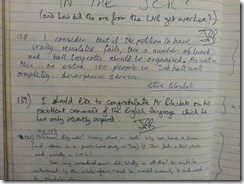 Back to Stephen Hawking building to get changed into Black Tie, then church service in the chapel, Champagne reception and evening meal.  We sat with the Old Gits, Richard, Andrea, Norman and Valerie.  Ravi who was coming was unfortunately unable to make  the event.  Good food, lots of wine and fun time.

I am sitting writing this waiting for my plane to Boston, I have 4 days work in Glastonbury CI.  I have caught a latish flight, so don’t expect to be tucked up in bed until midnight, (5am UK time).  Better go and drop my bags at the bah drop and get through security.