We had planned to stay here for a couple of nights. So today was a relaxed day. A short walk down the hill to view the Abbey. Though we had seen the Abbey before, in later visits we had ignored it. Today we went into the Abbey grounds to view any changes. There were some. There was now a shop, and organised tours. The bells were rung while we were there, but at some odd times. Unlike English bells, they are untuneful. Watch the short video below to hear the bells.

The village has several restaurants / bars. On previous visits only one was open, the restaurants seemingly taking turns opening during the week. Today several were open. There definitely were more people visiting the Abbey than we have seen before. We stopped at l’Archange, which was the least formal, so we could buy a beer and not eat. It has tables and seats on the town green. Of course, we did end up consuming an omelette for lunch along with a beer each. it was somehow simple, but French and very good. Rosemary paid partly with the PO debit card, asking the waiter to take the exact amount left in the account, and paid the rest in cash. He was perplexed, not understanding why she would pay that way. But he smiled and nodded.

France has taken to contactless payments in a big way. I don’t believe, in France that we paid for anything contactless three years ago, now it appears to be the preferred payment method.

On the way out of the village I photographed a number of houses, wooden frames with brick or mud infilling. I would be worried about living in them. Our neighbour at home has problems with their possible wattle and daub front elevation. So we looked at these houses with great interest.

Back up the hill to the campsite for the afternoon siesta, and a little wander around. During the evening, the bats came out again to play, making swoops in a circle between a couple of trees. I did not want to be beaten by Rosemary so attempted to photograph the bats again. They move so fast that you can’t rely on autofocus. I set the camera to manual focus and made a guesstimate where they would fly. I also used flash. Well, it was dark. I did get several pictures and got one that was better than Rosemary’s mobile phone one. Hurrah!

Holiday time, our first trip to France in three years!

Early morning alarm, 4:30 am, and off on the road at 5:05 am. We needed to make the 9:50 Chunnel crossing. Poor old Google was sure there was a closed road on the route. We hoped we knew better so ignored her. The traffic down the A41 and around the M25 and M20 was light. The parking lot on the east bound lanes was devoid of the anticipated lorries awaiting their turn to cross the channel. Predictably we arrived exceedingly early and could go on the 8:20 crossing for free or pay £33 for the 7:50. The 8:20 crossing it was. The formalities at passport control were quick, a stamp in the passport, no inquisition on our finances or where we were booked to stay. No questions regarding ham sandwiches!

At the other end, we were straight onto motorway and heading down south, to Le Bec-Hellouin. Soon we were on to the local roads, ignoring the faster toll roads. At Rouen, we took a different route to how we normally progress, more into the city and along the underpasses. Thankfully, Google took us off the underpasses at the point where they went down to 1.8 meters high (the campervan is over 2.00). I just managed to see the height restriction at the same time 🙂 Wow that was a near one.

Out of the city it was now a short distance to Le Bec-Hellouin, so we made a supermarket stop to stock up on meat and dairy (both of which we can’t bring from the UK). We were trying to run down our preloaded Euros on a PO debit card. It was due to expire on the 31st. We searched for a cash machine to remove more of the Euros from the prepaid account. The bank at the first stop was closed, with no machines outside. These French lunches!! The second stop was in a busier area, and I was able to withdraw some Euros.

We headed to Camping Saint Nicolas in Le Bec-Hellouin, a site we have stayed at several times, the first time was in a tent as we were returning to England. It is a pleasant site, with a bar and restaurant. The site is a convenient distance from Calais for a first night. There is also the Abbey to visit withing walking distance. The campsite was very quiet, just a few vans and caravans which stopped overnight. Never seen it so empty.

A lovely supper of a precooked vegetable and bean chilli plus rice and a smashed avocado. During the evening, we were entertained by bats swooping within centimetres of us and a large, black cat. Rosemary was more successful in photographing the bats on her mobile phone than I was on my new EOS R7. Both though did not make the grade for inclusion in the attached gallery.

The black cat was quite a fat cat, doing well off the campers. Late at night Rosemary had trouble with him, tripping over him as he weaved in and out of her legs in front of her. A black cat on a black night was difficult to see.

Set off from home at 6.30. I wondered why Google wanted me to go around the South of London, maybe she knew better and there were road works or accident. A quick look at traffic and yes M25 was closed but between the A41 junction and the M40 junction. Puzzled we ignored her and continued on down the A41. She was persistent, telling us to go South. Suddenly it twigged, I had set the no toll road option in readiness for France. With the aid of my backup Google Sat Nat operative, changes were made to the options and all was well. She now liked our route and stopped her nagging.  A timely reminder, we needed to buy a crossing pass, so again the co-pilot logged on to the Dart payment page and paid for two crossings.

Arrived at the terminal in 2 hours and 30 minutes and were now faced with 1-hour 40-minute wait for departure. Normally when you arrive early you are offered an earlier crossing. Not today, the terminal looked very busy. This called for breakfast at the LEON café, some playing with the Twitter and then onboard the Eurotunnel. The crossing was under 40 minutes, and then we were straight off to our first stop.  Google programmed back onto avoid toll roads. A short break at a BP garage for coffee and to check Twitter, then we were shortly at Camping Saint Nicolas in Le Bec-Hellouin. This campsite we visit regularly. It is around three hours from the port and has nice walks down to the abbey. While we were there we bought the ACSI camping site guides and camping card. By the end of the holiday, we had recouped the cost of these and made a considerable saving in out of prime season campsite fees.

This year we had taken the awning, erected it in lovely sunny weather, and sat outside drinking our JDs, Ricard and locally produced Farm Cidre. We must remember not to buy this Cidre, it is not the best. We treated ourselves to food at the campsite café, Moules Avec Roquefort, while R had a huge omelette and chips.

Another British VW camper-van rolled up next to us with a young loud couple. She was especially loud ?

Alas, the rain came in during the night, breakfast under the awning. One advantage of the awning is you can leave stuff in there, and it’s quite quick then to disconnect the van and drive off. First stop was food shopping at the nearest town Brionne. We had walked there on a previous visit. It takes 12 minutes to drive and over an hour to walk over some hills and through woods. Still raining, but dying off as we headed on to Pont-Audemer where we had a walk around quite a busy shopping centre and quaint town. Of course, it was closing or closed up as it was now 12.30.

Not far now to Honfleur, a quaint touristic town on the Seine where it meets the sea. Parking alas was on a meter and was 4 Euro for 2 hours. Lots of restaurants selling Plateau de fruits de mer. Now have a base guide price of around 45 Euro for an FDM. Not sure what the attraction is of this town, but it did seem busy with tourists and guides taking coach, or river cruisers around through the streets. Could be a stopping point for river cruises.

It had stopped raining and the sun was out, so back to the campsite where it was lovely and sunny. (Still managed to have a heavy burst of rain at 9.00.)

Supper, R was not feeling good, so I ate toast and pâté.

Sunday, May 5th 2019 Evreux and Medieval jousting at Harcourt

Quite a cold night, the sun was shining, but clouds around. Despite the weather forecast, there was rain. We set off to Evreux to see the Notre Dame cathedral. Are all cathedrals called Notre Dame? Found somewhere to park, the city was deserted, all the cafes and restaurants were closed. The cathedral was also deserted, met only two others leaving. No chance of a French Sunday lunch!

A wander around the city we came across a car boot sale. Nothing we liked, R always looking for Ricard glasses and flat irons.

For the afternoon we stopped off at Harcourt, fortified chateaux and arboretum. This was on our way back to the campsite. We were surprised to find the village heaving with people, and car park attendants routing us to playing fields to park. It was a special day, they were having a Medieval fare with jousting, the French against the British. Even managed to down a French-made IPA beer. Strong and quite tasty.

Back at the campsite, it was now sunny, and almost warm under the canopy. Supper cooked as a sausage stew and some wine. Took a quick walk down for the Abbey to get my exercise and to see that the place was still there. Tomorrow we are off the Bayeux.

Up early before Mike and Linda arrived to claim their home back, breakfast and farewells and of we set to good old blighty.  We were going to take it easy and stopped off at a campsite in the village of Le Bec-Hellouin just West of A24 a few miles South of Rouen.  Pleasant enough municipal site, pretty open plan and living grass to pith the tent on.  Probably will have Moules et Frites at the camp bar.

Walked down into the village, and discovered there was a monastery there, along with a church and French wedding.  No it was not a monk getting married.  Cooled off with a beer, rather slow service, must have caught the bar on a busy day.  The village houses were not like the houses we have seen else where, very English looking in many respects.  The monastery we discovered had been under the control of the diocese of Canterbury.

Back at the campsite we sipped a beer, order a bottle of wine and food.  Chips and sausage for R, and Moule frites for S. 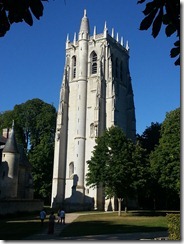 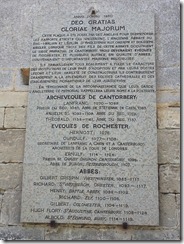 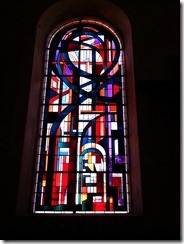 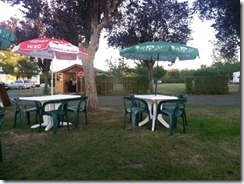 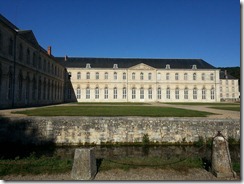 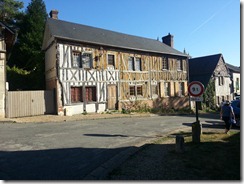