I am writing this blog entry on my mobile phone. Today is warm and sunny, working at home converting a Websphere 5 application to Websphere 7.

Thought I would add a photograph of the asparagus bed we picked a few weeks ago. 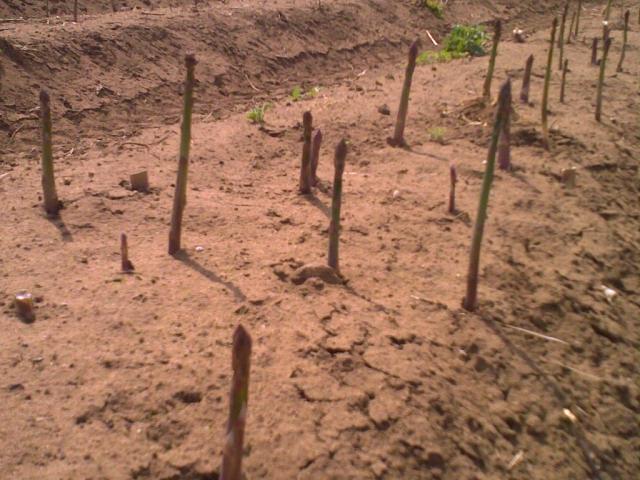 Jen, an old school friend of Rosemary, was having a surprise birthday party.  The party was on Sunday, and was taking place in Jen & husband Bev’s pub, The Cat Head Inn, Chiselborough, Somerset.  Jen and Bev have been landlords for the last few weeks, and seem admirably suited to the task in hand.

Rosemary and I drove down and stayed with Sue (another school friend) and Ken on the Saturday night.  Judy (from Manchester), the fourth member of the quartet of friends,  joined us.  Feasted in the pub across the road.  One could hardly be any nearer.

Sunday was a late start, some walks around the estate, and then a drive over to The Cat Head Inn to surprise Jen.  Success!

My last two days in Edinburgh are over.   I am not sure when I will be back there.  I had a pleasant evening exploring a number of hostelries in the city and sampling a few malts.  One a small bar was called the Jinglin Geordie Bar on Fleshmarket Close.

I also managed to get home on Thursday, the ash cloud moved off to the West of Ireland, and all the airports resumed operation to allow me home.  Arrived back home, picking some fish and chips up on the way.  Rosemary was out working as a polling officer in a nearby village.

I watched the the ending of the poll on TV, and was dismayed to hear the Gordon Brown would be hanging on to power despite losing the election.  How anyone can think that he and Alistair can get us out of this financial crisis after it was Gordon’s bad management of our economy that got us where we are.  All the favourable aspects of his rule of our economy, like low inflation have nothing to do with his leadership, but much to do with the world economy, India, Brazil and China.  Instead he has just squandered our money on bureaucracy in the hospitals,  paying GPs and consultants far to much.

He and Tony have dithered on our power systems, and when the lights start to go out in a few years time, I expect it will be the party in power that will feel the anger of the electorate, and not the cause of the crisis, Gordon and Tony.

As I booked my flight to Edinburgh, the Icelanders decided it was time to resurrect their volcano. Just before I turned the lights off at midnight, I thought I had better check my flight to Edinburgh. Easyjet was warning all flights to and from Scotland and Ireland were liable to  disruption, and I should check the flight.  The part of the site for checking flights was, of course, down.

4.45 am alarm, open laptop and check flights.  Glasgow cancelled, but Edinburgh still open.  Checked the CAA site, and the same news.  So off to Luton airport instead of the station.  Suffice to say, I have arrived in Edinburgh.  Will I get home, am I marooned here for the foreseeable future? [Ed – If he thinks I’ll believe a word of being stranded in Edinburgh because of ash, then the Monster Raving Loony Party will win tomorrow.]