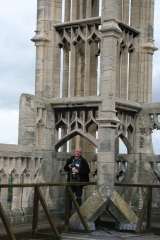 The annual three day Berkshire Cambridge Society weekend away happened on May 13th – May 15th.  The weekend started in Gloucester where we had a tour of Gloucester Cathedral, climbing the 269 steps to the top of the tower.  On route to the top we stopped to admire the roof space and fire prevention measures and the bells.  Following the tower tour, was a tour of the cathedral, and the Harry Potter Cloisters.   I was even shown where Catherine used to climb the tower when she was a teenager living in Gloucester.

Lunch was at the New Inn Gloucester, where a hearty buffet was served with a pint of Adnams Mild.  After lunch we had a tour of the newly restored Blackfriars, a Dominican abbey dating back to 1269.  Interesting room was the library, when the monks sat next to the windows transcribing books.  The window openings were cut to maximize the amount of light illuminating their desks. 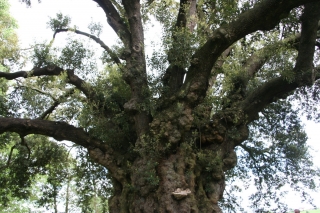 The final outing for the day was Westbury Court Water Garden, a national trust garden.  The garden was laid out to look like a series of Dutch canals.  Here there was a magnificent Holm Oak.

We then made our way to Speech House Hotel in Coleford where we were to spend two nights.  After dinner we were entertained by Christina giving as a talk about verderers in the forest. 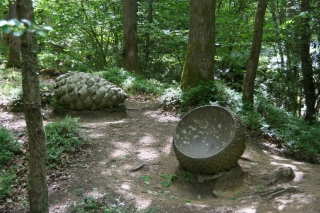 Saturday was a lovely dry day, and started off with a walk through the nearby Sculpture Trail in the forest.  Odd and rather peculiar was the verdict of most of us.   Would not give many of the exhibits house room.  Lunch back at the hotel, and then off to see Goodrich Castle.  One of the many castles built to keep the Welsh under control.  Spent quite a time here being guided around the ruin.

The drive back passed through Symonds Yat, with a fantastic view of the River Wye, and a twitcher’s paradise.   Masses of people there with their spotting scopes and cameras trying to catch the elusive peregrine falcons.  Managed to get a picture of a boring old buzzard.

Sunday and we had a tour of Clearwell Caves, an old iron mine which has operated since prehistoric times, up until the second world war.  The caves have also been used for filming scenes from the BBC drama Merlin, and Dr Who. 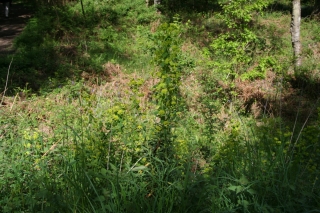 The last stop was Lydney Park for lunch and a tour around their gardens.  Spectacular valley setting for rhododendrons, and a great view of the now defunct nuclear power station at Berkeley.

More pictures are available here.  I suggest you also check out the links in the posting for more details. 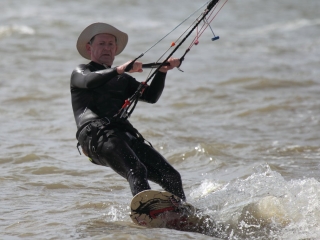 Trip down to Lee on Solent, lovely sunny day, and tried my new lens out on some people participating in aquatic sports.  See the whole Lee on Solent, Hampshire gallery here.
↑