We have had hectic days looking at tombs, stone circles and brochs, mixed in with eating and drinking.

The weather has been reasonable,  no rain and lots of sunshine, even getting passably warm. The hotel we stayed at was on the Harbour front, and we did well with a great view of the boats. Only down side were the boy racers who insisted on driving up and down the harbour road at 1am with their tuned exhaust pipes.

So on Wednesday we saw Maes Howe, Stones of Stenness, Ring of Brodgar, Barnhouse and a real live excavation in progress at the Ness of Brodgar. The Ness of Brodgar is so large it dwarves the World Heritage site at Skara Brae.

Thursday had us visiting the Island of Rousay by ferry. Before leaving we saw Betty’s Reading Room at the ferry terminal. 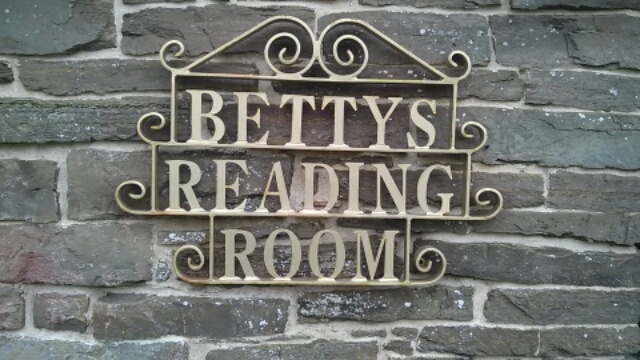 Another picture of Betty’s Reading Room. The place is full of books to be borrowed. 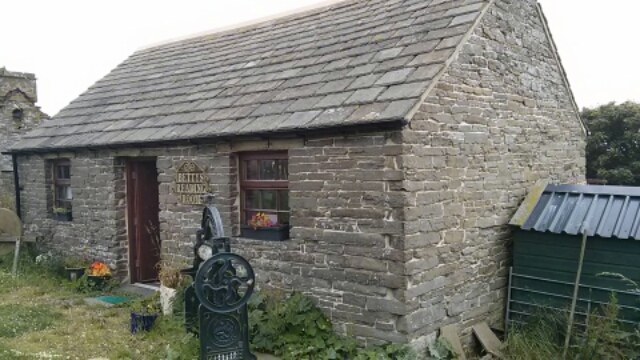 We circled the island twice because the the coach could not turn around. We saw the Midhowe Chambered Tomb and the Midhowe Broch. After lunch at the Pier we entered the Taversoe Tuick double chambered tomb. 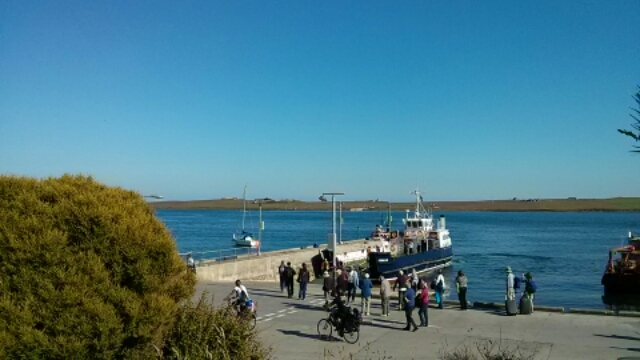 Ferry terminal on the Island of Rousay. 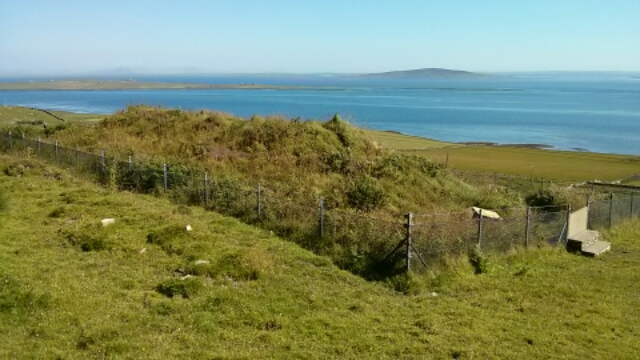 Taversoe Tuick. Notice the cloudless blue skies of Scotland and the Orkneys.

Friday is our last day of this section in Orkney, we are back for a couple more after our four days in Shetland. We went off early to Skara Brae, a world heritage site. You cannot walk through the habitations now. Instead you view them from the sides and visit a reconstruction of the best house. This house was remarkable in its size and could easily accommodate the whole group of us. As well as seeing Skara Brae we also walked around the local Laird’s house, Skaill House. On display in the dining room was Captain Cook’s dinner service. This was for payment for lodging of a few officers in the house when the expedition returned, after Cook’s death, and was stuck in the Orkneys for weeks.

After this visit we drove to nearby Marwick Head, a cliff where the Kitchener’s Memorial tower stands over the cliffs. Actually we did not walk to the tower but instead bird watched, seeing a few Puffins fly in, Guillemots, Fulmers, Kittiwakes. Rosemary was shown a rare orchid, a frog orchid. Picture to come.

Lunch next, at the Merkister Hotel, where Jeremy Paxman had very recently stayed while researching Kitchener. We had a  ploughman’s with no bread, but chips and boiled potatoes!!!!! It transpired our leaders had asked for bread and been told they had none. A little while later, however, we were offered rolls. Rolls are not considered bread in Scotland.

Finally a drive to see yet another broch, Gurness Broch; a remarkable multi-storey building with lots of dwellings outside the main broch.

Afterwards we made our way to the airport for the flight to the Shetlands. Predictably the flight was late, something to do with passengers on the incoming flight from Inverness not wanting to fly because of the fog. Anyway we have taken off, but the pilot does not sound confident about us landing. FlyMayBee did land on the Shetlands, and first attempt as well. We made it to the hotel for supper and a nightcap.

Today was a walking tour of Kirkwall. Day was lovely sunny and warm with a light breeze. We started off by Saint Olaf’s gate. 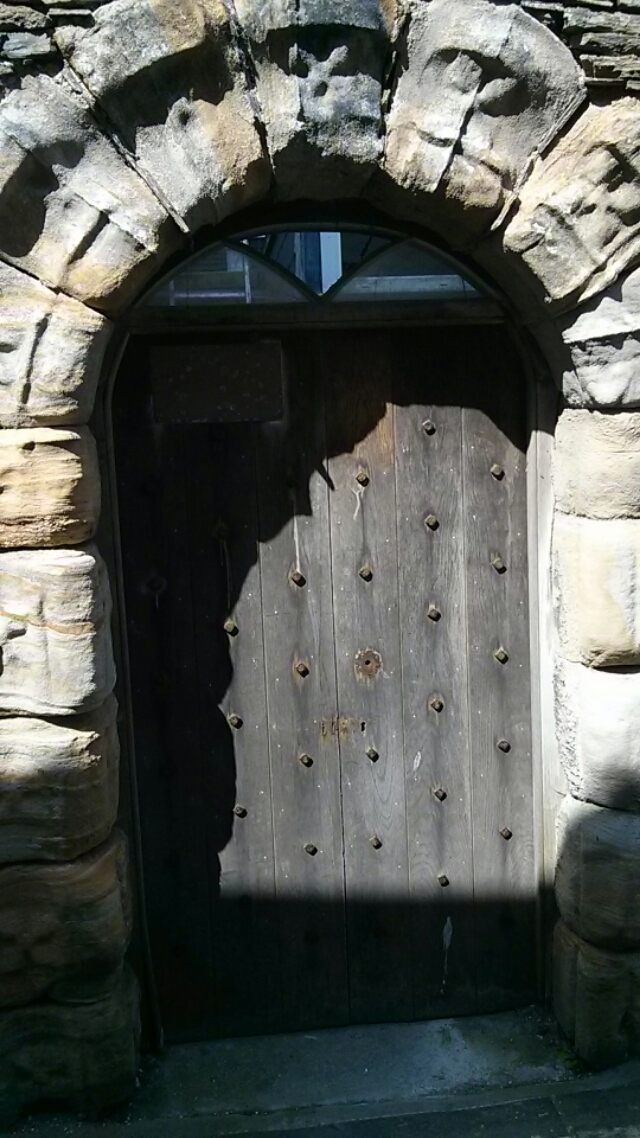 Then walked to The Cathedral built by the Vikings. The Cathedral run by the council is now secular but still banned a humanist wedding!!!

On to the Earls house, which is a ruin and then the Bishops house also a ruin. 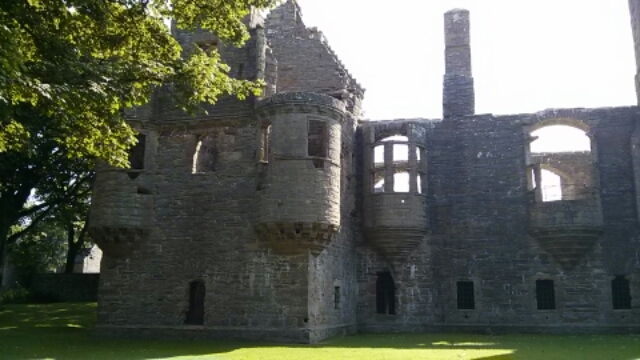 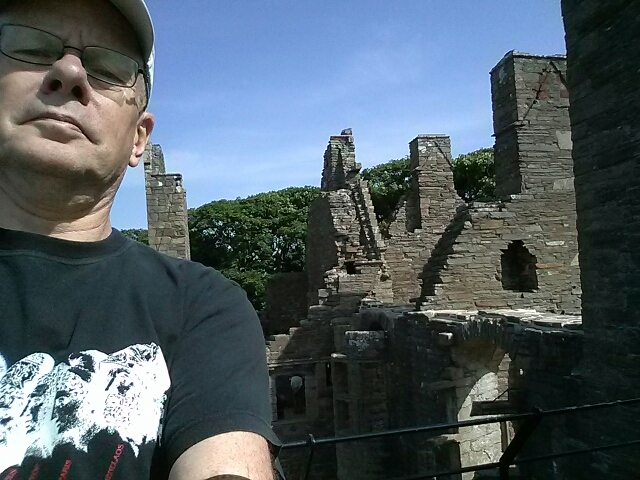 We all then went on to lunch which was rather a time consuming affair, taking rather too long to prepare the main courses for us all. The afternoon was spent visiting the museum where the had a  display from the archaeological digs in Orkney.

The late afternoon was sunny, though with some cloud coming in. Hope to take some spectacular sunset, late evening photographs.

Before I went to bed on Sunday, noticed the weather was clearing a little bit, so was able to wander down to the quay and take some pictures of the setting sun. I have some super pictures, this sample taken on my mobile phone does no justice. You will have to wait a few weeks. 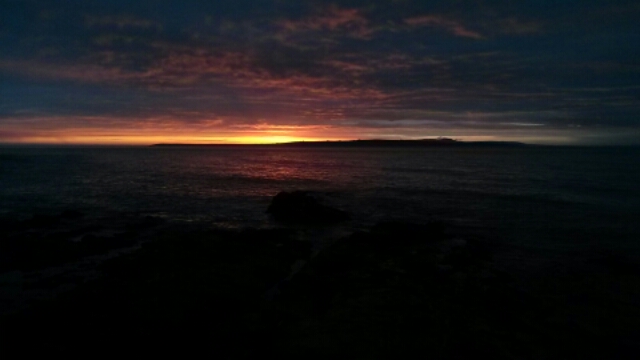 Stroma in the setting sun from John O’Groats

Today we caught the passenger only ferry to Orkney, then the bus to Kirkwall. Left our bags at the Kirkwall Hotel and then walked up to the Highland Park distillery where we had a tour. Alas the distillery was not in operation, being holiday season and refurbishment month. Anyway tasted a whisky and came away with a couple of glasses. Most of the others on the tour were from the Faroe islands. Swapping one cold, windy wet island for another. 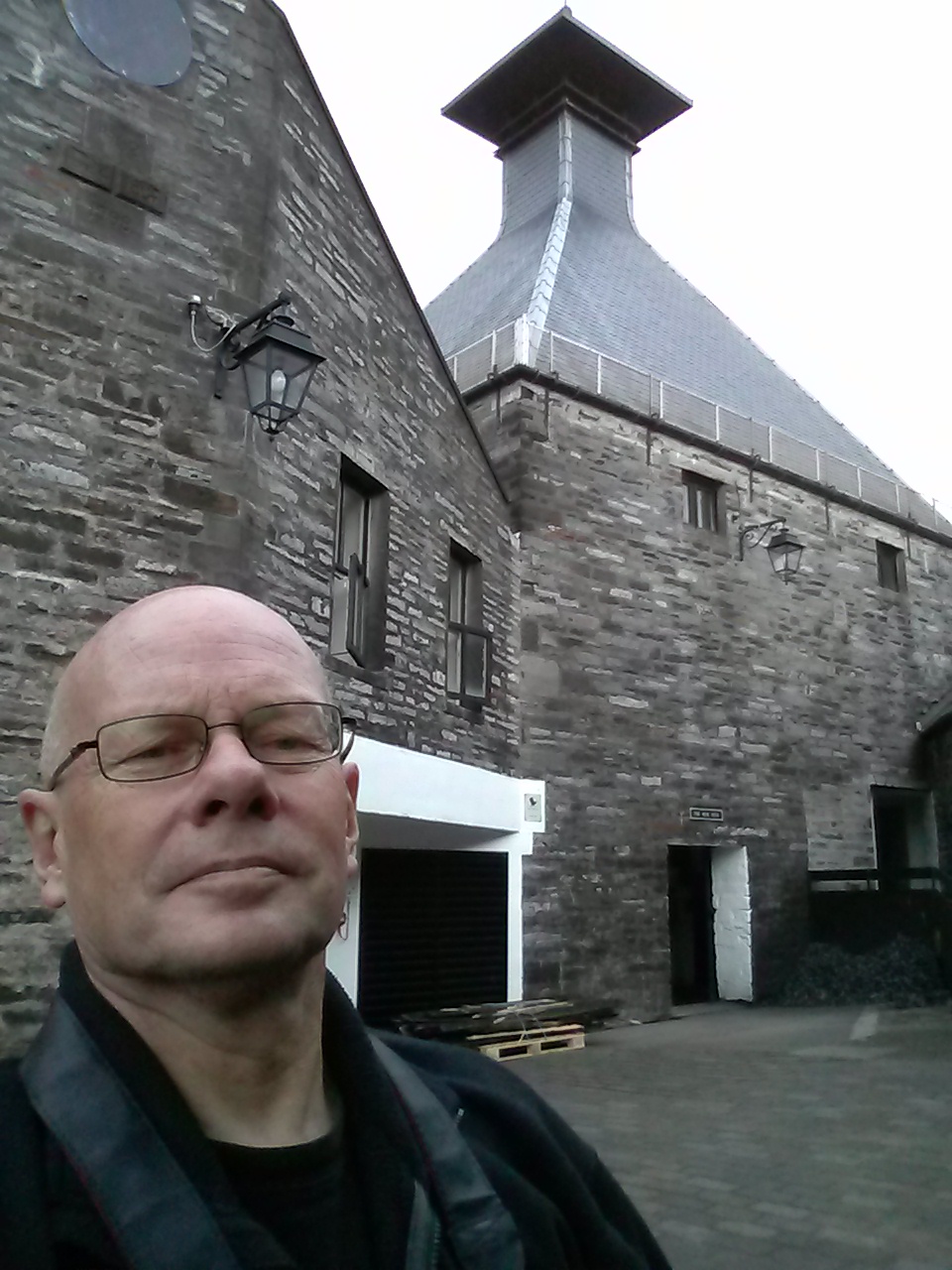 Back in town we bought some gorgeous Orkney Island ice cream and am having a beer before meeting up with the rest of the group. 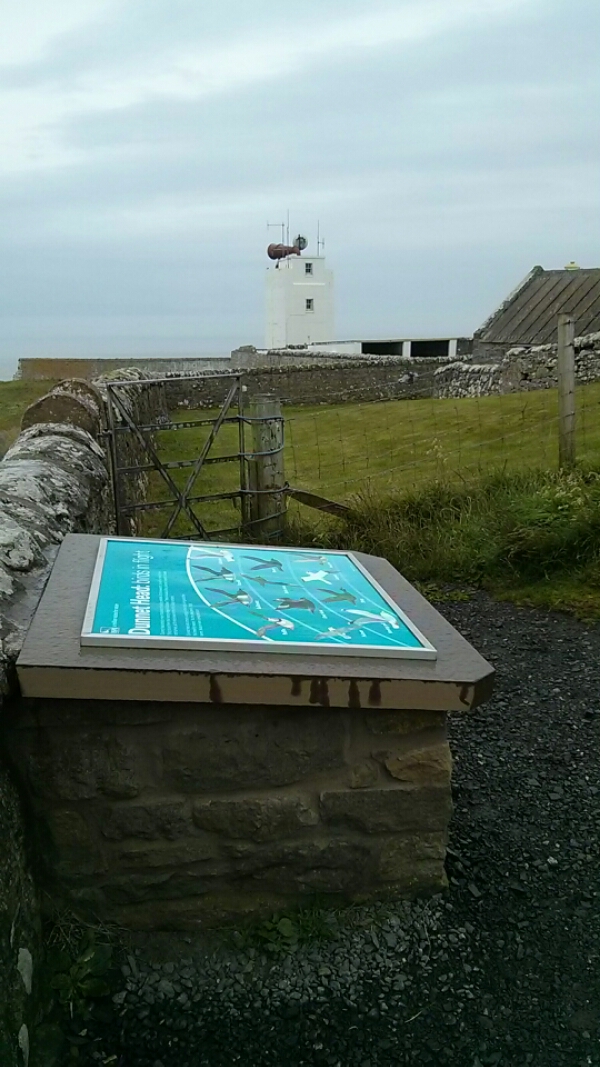 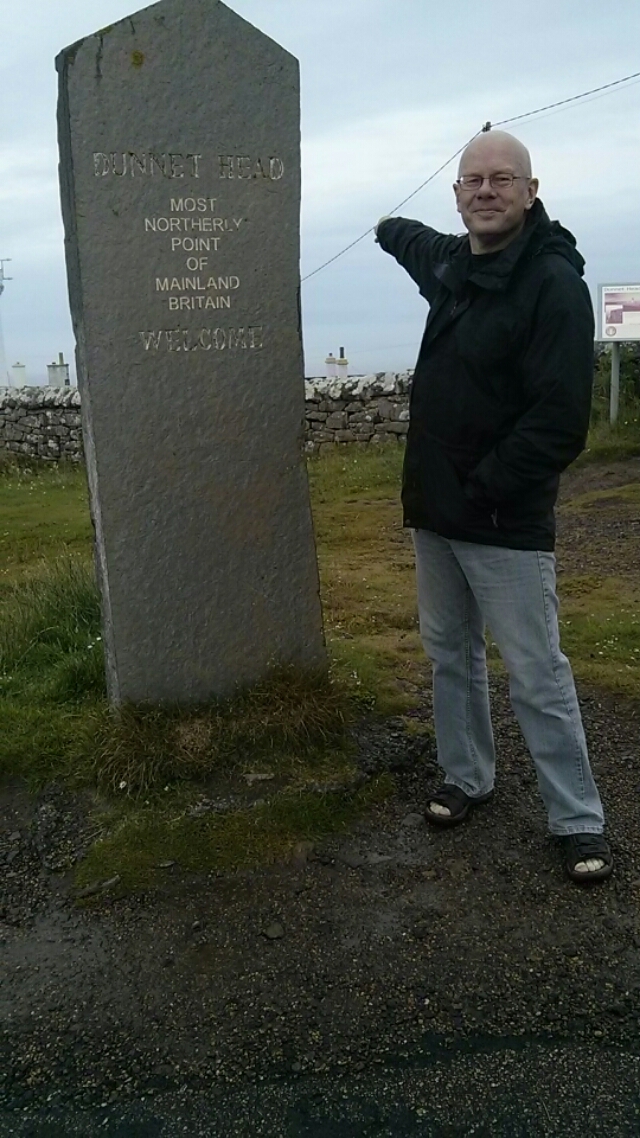 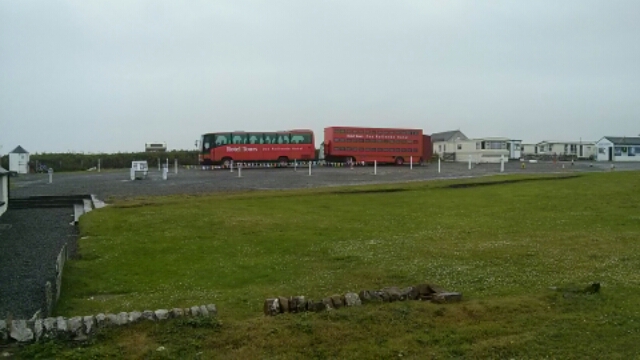 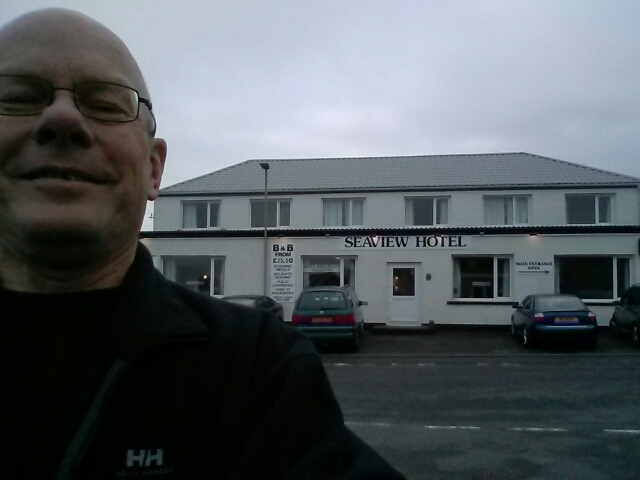 Drove up to near Perth today. Staying in a pub called Bankfoot in the village of Bankfoot Inn a few miles North of Perth on the A9.

The drive up was horrible. Very heavy rain North of Birmingham, which cleared for a while, but started again South of Glasgow. Still we made good time and were here by 3.30.

Meal in the pub, ear wigged to discussions about the Scottish devolution. Not sure what side they were on. 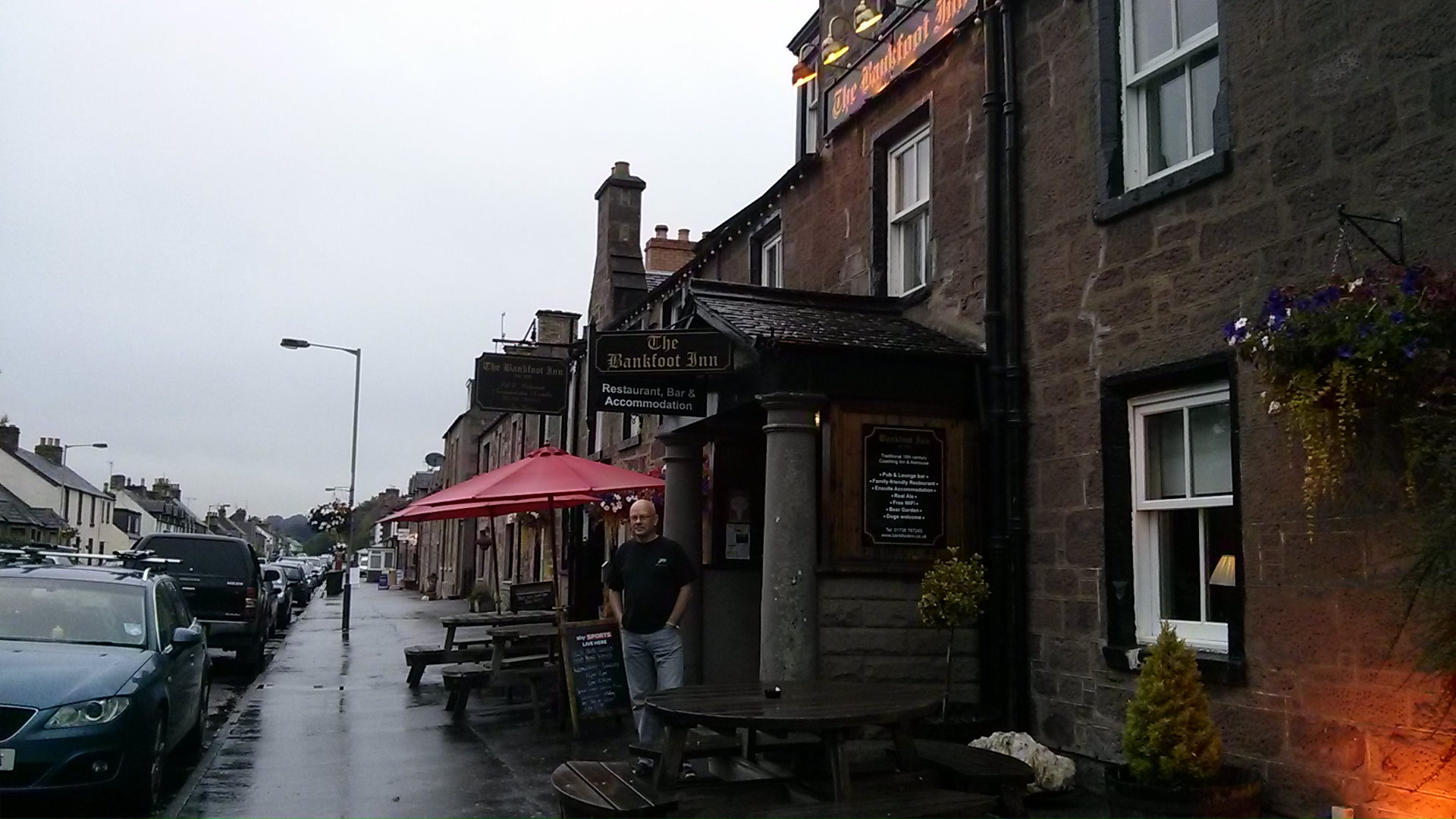