Another day started. No queues for showers, and yet again an excellent breakfast at The Love Fields. Yes, I ate a full English, but also breakfasted on a couple of large excellent pastries. I was spoilt. I headed down to West Holts, where I spent the early part of the day.

First up was a Japanese band who played easy listening music. A few members of their entourage came out into the pit to watch. Later on, some of the band members came out to watch other bands.

Brass Against is a collective group of musicians who share the goal of creating music to inspire social and personal change. The band curates songs from a variety of influences from Tool, Rage Against the Machine, Soundgarden, Black Sabbath, Run the Jewels as well as their own compositions in a heavy brass filled symphony.

This Is a Work Event

After Brass Against finished playing, I had a message from Rosemary about a flag seen flying, ‘This is a Work Event’. It just so happened to be in the West Holts crowd. Rushed on over to the flag, and cajoled is owners to photograph me holding it. Interestingly it disappeared in 15 minutes, and I never saw it again.

After the picture opportunity I went back to watch Black Midi, an English rock band from London, formed in 2017 by Geordie Greep, Cameron Picton, Matt Kwasniewski-Kelvin and Morgan Simpson.

Finished at West Holts and walked over to watch Glass Animals on the Other Stage. I was far, far away and did not have an unobstructed view. Watched them for a few minutes before attempting to meet up with Ed and Mary who had gone their separate ways. Tracked them down to the Williams Green and had a pint of beer with them before we headed over to the Pyramid Stage.

We met up with Jon watching Noel Gallagher. It is quite easy to get down in front of the mixing consoles, there is a path in the centre of the arena from the back to the mixing decks.

After Noel, we headed to the Acoustic Tent. We had quite an advantageous position to see Ralph McTell. Managed to grab a video of him singing his famous Streets of London 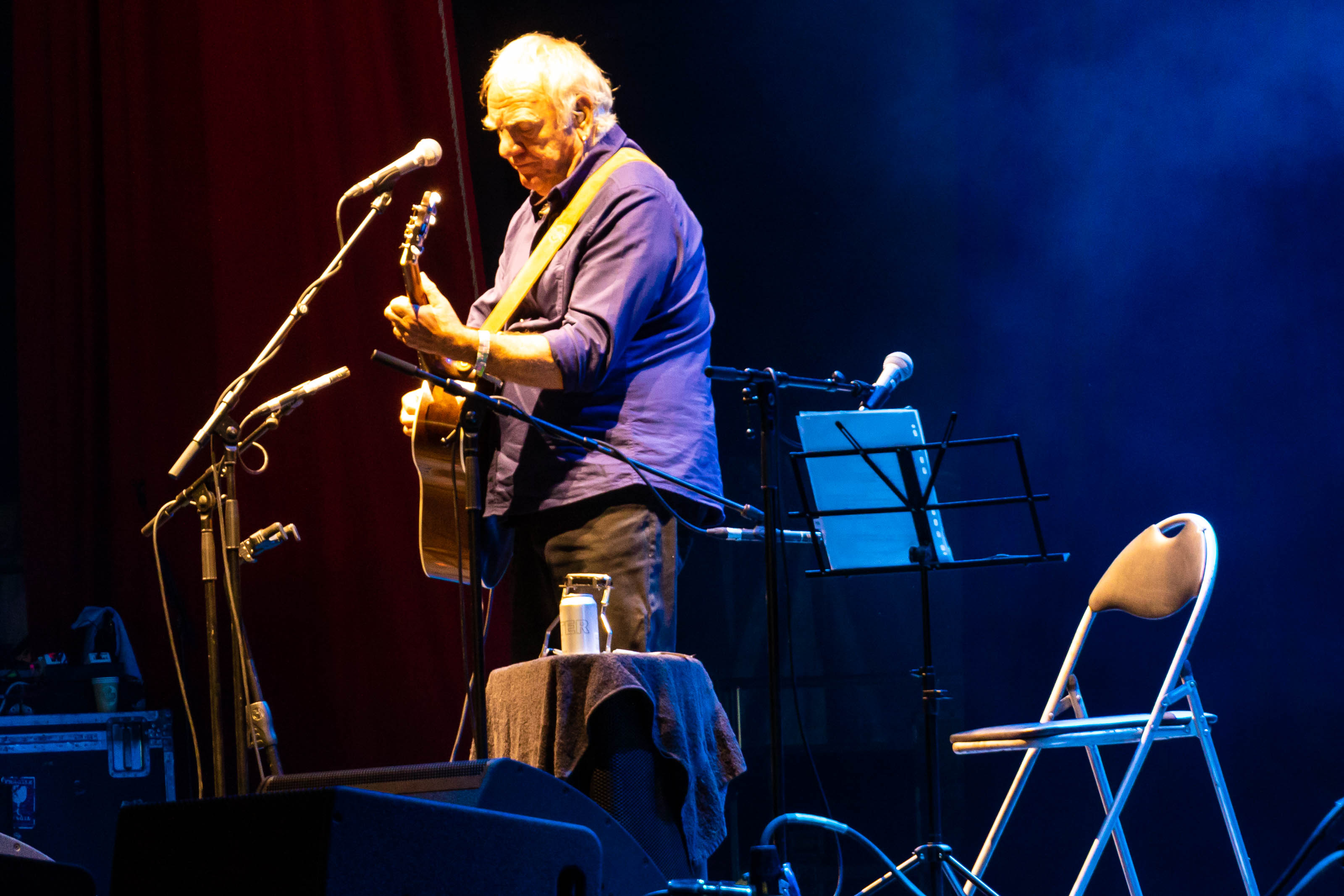 The final band on the Acoustic Stage was The Waterboys. The Waterboys are a folk-rock band formed in Edinburgh in 1983 by Scottish musician Mike Scott. The band’s membership, past and present, has been composed of musicians from Scotland, Ireland, Wales and England.

I spent much of the late evening walking around the circus and theatre area, watching many walkabout acts, before finally watching a show at the Circus Tent, Briefs Bite Club, I had great expectations for the show, but it did turn out to be rather tedious.

After a good breakfast, I walked down to the West Holts Stage. The West Holts tends to play Jazz, and World Music. It is one of the major stages of Glastonbury, and not overly crowded. You can easily get to the front, or just relax sitting on the grass. The stage is well provided with food and drink. The famous Brothers Bar and also the Goan Fish Curry stall are located on either side of the stage. The West Holts stage is also one of the few stages where they have artist signings.

The first band today was Nubiyan Twist. They describe themselves as a UK Afro-Jazz 9-piece band lead by Tom Excell, fusing groove driven music with sound system culture and improvisation.

Having enjoyed watching the Nova Twins the previous day, I tried to go and watch them again at the Greenpeace Stage. A very short walk from West Holts. I was able to get up close to the barrier and grab some close-up pictures. This was a totally different experience to last night, a far tamer crowd more worried about climate change than moshing.

I walked over to the John Peel Stage, quite a trek and watched a couple of bands playing, Girl in Red, followed by Sigrid.

Walking from the John Peel stage, along the track high up on the pyramid stage field, I spotted Robert Plant and Alison Krauss finishing their set. The crowd was thin, so I walked down to the edge to take some photographs.

Back at West Holts there was an excellent set by Bonobo. Their music is soothing, combining club music with world music delving into jazz.

The final band, the headline act on West Holts was Little Simz, a black woman rapper. I’m not particularly into rap, but she was good and got the crowd moving. As you can see, I was on the rail at the front, much to the annoyance of the younger generation around me. What was amusing, I received a DM tweet from Mark, someone I worked with years ago. During the performance, this tweet appeared, telling me I had been spotted on the Little Simz set. His daughter and wife had been watching the live set on BBC THREE. Yes, that is me with the hat, next to the rabbit.

On Thursday, the main stages have not opened, but some of the smaller stages get going during the afternoon. There are hordes of people crowded around the bars, and it can be quite a fight to get a drink. So, I did not bother. This year I drank extraordinarily little and carried around a few cans in my backpack to keep hydrated. Beer had temporarily lost its lustre for me, I could not taste the difference between cider, ale and lager, they all tasted the same, sweet water. COVID had caused me to lose my sense of taste. It was the same with the food, the delicious offerings tempted me very little. I tried, but nothing tasted as it should.

After a full British breakfast and some exploring, I headed to the Rabbit Hole. It is in The Park, which is terribly busy on a Thursday with Stonebridge bar doing roaring trade. I waited until the Rabbit Hole opened and watched three bands. The Rabbit Hole is a small tent with a small bar, DJ set and stage. Many famous musicians come here late at night. (I have yet to see one!) The Rabbitt Hole used to be further up the hill and required a little effort to reach it. The last two Glastonburys have seen it move down into the main area of the Park.

Thursday was a very sunny day, and I had forgotten to put suncream on my face and arms, so finding venues undercover was a promising idea.

I had come to see Sofy, a band from the Glastonbury Emerging Talent competition. They were well worth the wait.

After grabbing some lunch in The Park, I headed over to the Truth Stage in Shangri-La to see Beans on Toast. Beans on Toast is a singer songwriter who produces an album every year and is rumoured to have played Glastonbury more than anyone else. He will be playing at the Cambridge Folk Festival this year. His songs are political and easily sing-along-able.

The Glastonbury programme always has several TBAs. The TBAs are the unannounced bands who will be playing. The secret for Glastonbury organisers is to spread the word to a few people to get someone along to watch the band. Sometimes this goes wrong, and the word is spread everywhere, and thousands of people descend on the stage. The secret sets are from quite high-profile bands. I had subscribed to a twitter account which announced the rumours, so I knew Bastille would be playing at Williams Green. I tried to get to Williams Green. The whole area was cordoned off, the crowds were dense. I got through the cordon, but nowhere near the stage. I gave it up as a bad cause and eventually headed back to the Truth Stage. If you want to see a TBA, get there at least while the previous band is playing, or better still the band before. I remember watching the band Pulp years back because I had heard a rumour. I had a good place to watch the band, but the Park Stage was also cordoned off long before the band started to play. So many people had descended on the stage.

I arrived to see the punk band Pigs Pigs …Pigs. and watched from the back.

After the 7 pigs, the crowd thinned, and I was able to get nearer the stage for the Nova Twins. They put on one fantastic show. I would go and watch them again at the Greenpeace Stage the next day. The crowd was wild, I did edge back a little to remain out of the mosh pit.

I will be blogging each festival day with videos and pictures of the bands I saw. I have put together a short video and pictures of the different areas of the Glastonbury Festival site at various times and days. It is not complete. There are areas I did not visit, or somewhere I forgot to take photographs. For instance, I have yet to visit the pier at Glastonbury-on-Sea. I did walk past, but I have an anathema of queuing.

The video is of the Theatre area, where there are so many interesting walkabout acts to watch. The Theatre area is the first area you enter coming in from Pedestrian Gate C. I can imagine some people camping in other areas of the site will never get to this area.

The areas of the Unfairground, Block 9 and Shangri-La get going in the late evening and continue until the very early hours with the last music ending at 6.00am.

My three ex-work colleagues (John, Mary and Ed) from Walker / Elevon were working as stewards in the Silver Hayes are. This is a dance area and also goes on until 3 am and later.

The Peace Garden is located above Greenfields, near to the Stone Circle. In the sun it was a peaceful area to relax and catch up with some sleep.

I ventured onto the hill above the Park Stage, this is where the GLASTONBURY version of the HOLLYWOOD sign is located. At night there is a fabulous view of the whole site, with the Ribbon Tower in the foreground, and Arcadia in the background. I failed to get to Arcadia, the crowds were too much to get through, when there was any music playing. You need to get there before the main stages end. I made it just as the last DJ finished at 3am.

The old battered painted cars are at a ‘Drive In’ Cinema called Cineramageddon. To watch films, the cars need to be booked in advance .

That was it. Glastonbury was over. We showered, packed up and The Love Fields at 7 am in the morning. Stopped off for a Costa and arrived home.

Ravi and Simon stayed over, so we entertained them to some local village life. The Ludgershall Bike Night. Thousand of bikes parked up in the village from 6 to 9. Stalls selling beer, fish and chips, burgers were doing a roaring trade. We opted for the pig roast which was run by a local Kingswood man. Was accosted by the Air Ambulance, who saw we had been to Glastonbury and then talked at great length about the event.

There was a fabulous American truck unit on display. Rosemary saw it pass our house that evening. The event earns money for the Air Ambulance and other charities.