Rosemary and I visited the Bucks County Show. First stop was breakfast, we bought some sausage rolls in the food hall. Not very good!

We wandered around looking at all the stalls and animals. Enquired about new lawnmowers, electric vehicles. DB Guns had a good display of old guns, and guns which had exploded because of blocked barrels.

The cattle were on show, all groomed looking clean and glossy. The judges walking amongst the cattle marking up their notes and discussing which animal was to be the winner.

There were the Vegetable, Flowers, Cake, Handicraft and Photography competitions. Some huge leeks and nice looking cakes.

The sheep sheering exhibit was there. I know it is a bit corny but was interesting to hear about the old breeds, why they were bred and why some were successful and others not successful in modern times.

The Friars Club of Aylesbury brought many famous bands to the town. It was about to end when I moved to Aylesbury back in 1982. I didn’t know of it, and shortly after I moved here, the club closed.  In the early 70’s David Bowie debuted two albums in Aylesbury.  The Rise and Fall of Ziggy Stardust on the 21st September 1971 and Spiders from Mars on the 29th January 1992.

On the 16th January 2016, David Bowie died. After a special event in Aylesbury, a week after his untimely death a petition was started to create a David Bowie statue. The council agreed, but would give no money. A Kickstarter project was started to raise the money. The money was raised and the statue built. It was installed while I was travelling in New Zealand. It has taken me until the 17th October to actually go into Aylesbury and see the statue which I contributed to. It well worth spending the time to see it, and be there at the top of the hour. A random track from David’s music is played every hour.

For those who live far away, there is a live David Bowie webcam.

The reason we rushed back from Scotland was because we were booked to see a musical at the Waterside Theatre in Aylesbury. The show was a Small Faces musical called All Or Nothing. The touring play was about the early days of the Small Faces, their rise to fame and how they were ripped off by their various managers. We went with Ian, Julie, Ian, Judith and Sue.  The original reason we went because the grandson of a friend was starring as Ronnie Lane.  The musical was excellent playing many of the hit records from Small Faces and other 60s music. We learnt much about the Small Faces, which I “verified” on Wikipedia when I got home.  The music was loud and at the end the whole audience was standing, clapping and singing along to it. This gets my vote! Friend’s grandson……..Brilliant! 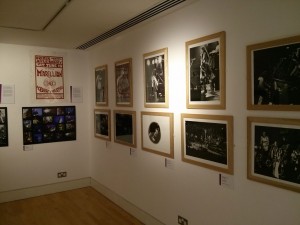 I have returned from the Friars Club exhibition in the Aylesbury Museum.  It has been on for several months and I have only just managed to get to it.  The Friars Club was the host for many rock bands during the 70’s and early 80’s.  Famous names like Free, David Bowie, Blondie, Pink Floyd, Emerson Lake and Palmer played Aylesbury in their early days of success.  Friars club was still running when I first moved to the area back in 1982, alas the club stopped in 1984 before I had even heard of it.  It has reformed, but is not running the weekly events it was renowned for. 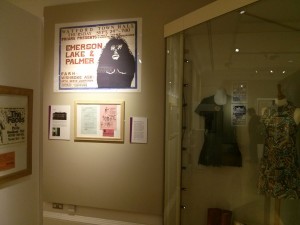 The exhibition consisted of the advertising posters, band booking contracts, ticket stubs, band pictures, news letters etc.  There was a drum set from Pink Floyd on show, along with the bass guitar from Marillion.  To me the Friars club did not exist, the exhibition though was still a throw back in memory lane, remembering all those bands who had played in my formative youth.  When I saw a poster for Rare Bird, I immediately thought of the vinyl album back at home which I have not played for years.  That will be going on the record deck shortly. 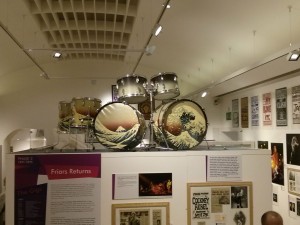 I went around the the exhibition with a friend who was in her teens in the early 80’s, she had visited Friars club in its later days between 1982 and 1984.  She said it had been the only good thing to have come out of Aylesbury.  She recounted how her £6 pocket money for the week went on £4 for a ticket to Friars and the £2 on drink and chips.

Another pricing point, in the early 70’s a ticket cost 70p.  Glastonbury first ticket in the 70’s was a pound, with free milk on tap.  Now the price is £210.  OK can’t compare the first Glastonbury festival with a Friars Club gig, and todays Glastonbury.

Rosemary and I were invited by Tony to attend the Aylesbury Business Excellence Awards run by The Bucks Herald.  Tony was on the short list for winning the Small Business of the Year award.  Tony owns Ladymead Joinery and specialises in top quality hardwood windows, doors, staircases and fencing.

The event was a black tie dinner and awards ceremony at the Aylesbury Civic Centre.  Amazingly the trousers appeared not to have unduly shrunk in the wardrobe since they were last worn. The meal was a four-course meal, (Chicken and Smoked Bacon Salad, Lamb, Profiteroles and Cheese) with wine, and various speeches.  Our waitress was not a young thing, but was very proficient and quite a character.  The main entertainment was the impressionist, Steve Nallon from the TV show Splitting Image.  He provided us with the voices of Tony Blair, Anne Widdecombe, Alan Bennett and many other politicians and entertainers.  Dez Kay from Stoke Mandeville Hospital Radio was the Master of Ceremonies.

After the ceremony, the disco started, hosted by Phil Gomm.  At which stage we decamped to the bar and some quiet.  Though I could have stayed and watched for hours, admiring the hairdressers from Destiny Hair Designs and the Bucks Herald girls dance.  Did though have a chat with Adstock Web who speacialise in Web solutions and search engine Optimisation,  who alas failed to win the innovation award, which went to Littlecote Soap Company.