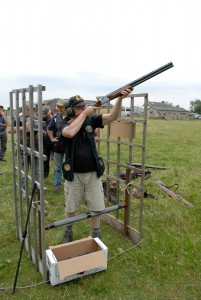 This Sunday we had the second leg of the Welsh shoot at Kingswood Gun Club.  The shoot was on Pete’s farm and had already been set up by Mark and Graham, all we had to do was load the traps, and erect the cages.  Saint Brides Major arrived at around 11.00 in their coach, we all had a coffee while we were squadded.  We then had an enjoyable clay shoot of 70 birds, some quite demanding birds, some that should have been easy, but for some reason I missed.  Unfortunately the predicted rain came before the end of the shoot.  It was very noticeable the Welsh were well prepared for the rain, while most of us from Buckinghamshire expected the rain not to arrive before the end.  By the time I had picked up clays, and help clear up I was definitely a drowned rat.

Quick stop at home to change, and pick up the chauffeur and we were off for the shoot lunch at the Crown in Tyford.  Sunday Roast, pudding, cheese and biscuits along with some beer.

Unfortunately it seems we did not do enough to beat Saint Brides Major, and Kingswood Gun Club had to hand over the cup for a year.  There was not much in the scores, we were beaten by only a few shots.  Next year we will have our revenge,

On Saturday, Rosemary and I visited Dulwich Picture Museum to view an exhibition of Ravilious pictures.  Ravilious painted water colours before WWII, he became a war time artist, and painted until 1942 when he disappeared on the 2nd September, presumed dead, after his flight never returned from a mission in Iceland.   We first saw his work in a Gallery in Saffron Walden at the Fry Art Gallery a couple of year ago.  There we were impressed by his Submarine Lithographs.

At this exhibition we saw  so much more of his work, including much before the war.  A famous picture of his was painted at the outbreak of WWI, this is the Westbury White Horse with a steam train passing by. 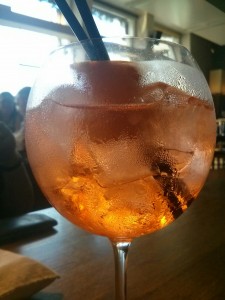 We had chosen the hottest day to visit London, sitting outside in the sun, having a lunch at the Picture Gallery proved to be quite toasty.  Afterwards we went over the the Shard, Rosemary refused to pay the rather exorbitant price to take the lift to the viewing platform.  Instead we had a drink in a nearby bar.  Rosemary going for an Aperol Spritzer and me for a boring lager.

Journey back to Aylesbury rather was fraught, our trip was abruptly halted at Harrow on the Hill, where we were all ordered off the train.  The points ahead had failed.  There was a complicated alternative route, which we took by tube, only to see a Chiltern train passing us by and going to Aylesbury Vale Parkway.  The points were working again.  We resumed our trip to Aylesbury from Rickmansworth, and arrived at Aylesbury Park Way an hour late.  Needless to say Chiltern Railways compensated us, extremely quickly!, for the late arrival.

Early morning appointment at the eye hospital in Aylesbury, and then into town for a coffee at Cafe Nero while we waited for the Bucks County Museum to open.  There was a small exhibition of Dr Who memorabilia on show, sourced from collectors throughout the county.  Open until September 5th.  The star is the Dalek, called Darren. Neal Davies, who works for Fremantle Media, a company that makes TV shows including Grand Designs and Escape to the Country, constructed him from plywood and fiberglass for a £20 bet.  Apparently it moves, talks and lights up, all through remote control.  There were some fab womens shoes decorated in Tardis Livery.

Of course there was a tardis, a K9 and Cybermen along with posters and signed memorabilia all the way back to William Hartnell in the days I watched the original series in black and white from behind my Gran’s sofa.

Valerie and Norman stayed with us over the weekend.  We met up at the National Trust property, Hughenden Manor home of Benjamin Disraeli in High Wycombe for lunch and then a tour of the property.  As well as being the home of  Benjamin Disraeli, the house had been requisitioned during the second world war and was used to produce target maps for the night time bombers of Germany.  We were taken for a a very informative tour and talk about the map making which occurred during WWII on Hughenden Manor.  Like Bletchley Park, those who had worked here, kept quiet about their work, telling no one.  This map making at  Hughenden Manor  only came to light in 2004, when an elderly visitor was heard to say that his desk had been in the corner by the window during the war.  His conversation was overheard by a NT room monitor.  It took another year before the visitor had been released from the official secrets act and could divulge what had happened on the site. The National Trust has now put together quite an impressive exhibition about the people who made the maps for the night time raids of Germany.  The maps were hand drawn from reconnaissance photographs of the the target areas, printed, and then sent over to Bomber Command nearby at Naphill.

We had a lovely day at the Manor, even lazing on the deck chairs on the lawn in the late afternoon sun.

On Sunday we visited Gallows bridge BBOWT nature reserve.  The birds took the hint and did a disappearing trick, except for some 20+ Geese.