We went into Oxford with Valerie and Norman. Norman went his own way to see an exhibition at the Ashmolean, while Rosemary, Valerie and I walked on to the Jam Factory. It’s near to the rail station, and is a café/bar /restaurant /exhibition space /entertainment space built from a converted, yes, Jam Factory. We went to see a set of post card sized art works produced by numerous artists which were being auctioned to raise funds for Sobel House. We all selected a few, and started to bid on them over the next few days. Only my bid was successful for an evil looking cat which I bid £5.01 for. I say successful, because no one out bid me. I still did not receive it, it was lost or sent off to someone else. I did receive a replacement card, a Lion, on whom no one bid, but it was not my evil looking cat. Yes, a tad disappointed.

We drank coffee and chocolate while we perused the cards, and looked at some of the other paintings. The men’s loo was decorated in old Beanos. The place was quite pleasant and had some interesting food on the menu. Probably worth while returning to, instead of eating in the usual Vaults and Gardens where we now headed off to.

We passed through the covered market which was semi open on a Sunday. There was an excellent Halloween cake sculptured into the shape of a hacked off leg in the cake shop.

On the junction of Turl Street and Market Street, outside Norah’s Antiques was a production team filming a scene from an episode of Endeavour. We waited and watched them film a street scene with Roger Allam (Inspector Thursday) considering the shop window. There were also quite a few old 60s cars parked in the surrounding streets, so I expect there was quite a bit more filming about to be done.

We walked on to the Vaults and Gardens for lunch, where we were quite quickly served and found somewhere to sit.

After lunch we visited All Souls Collage and took walk around their quads and the chapel.  There is a magnificent screen with niches containing statues of saints, bishops, and monarchs, arranged in rows on either side of a Crucifixion scene, just above the altar, and a Last Judgement, high up under the roof. The original statues, destroyed in the sixteenth century Reformation, were not replaced with the present Gothic imitations until the nineteenth century.

After All Souls, we split, Norman and I took a quick walk around the university parks, while Rosemary and Valerie headed to the new Bodlein library to see the latest Treasures and Jane Austin.exhibitions. We all met up at the library and then went for a beer at the Lamb and Flag before going home.

Met up with Valerie and Norman, their daughter & her fiancé, for lunch at the James Figg pub in Thame. They had been attending a wedding at Notley Abbey nearby. We had never been to the James Figg, and to be honest we have not been to most of the pubs and restaurants in Thame.  Steve frequents Costa when Rosemary is doing her round of charity shops.

The James Figg is themed on boxing, named after James Figg an English bare-knuckle boxer. He is widely recognized as the first English bare-knuckle boxing champion, reigning from 1719 to 1730.  He was born in Thame. It’s a good pub, with a good choice or real ales, or is that cask ale, or the new trendy phrase of craft ale. In any case, it caters well for beers. Extensive menu, though we wanted to eat relatively lightly, so we all went for starters, each choosing three starters for £10.  This was a kind of tapas meal.

Yes, I can quite recommend the James Figg, maybe Costa is going to see a lot less of me.

We departed for home, Norm and Vallerie driving over to our house for the weekend, while Rosemary and I quickly dropped into Waitrose to buy some more Monkfish. We had decided tonight’s menu was Monkfish. I was looking for a Kilo for the four of us. My first shop the previous day was Tesco in Bicester where they had one filet, just under 350 grams. I bought this, at the same time phoning Sainsburys in Bicester. They too had one small fillet in stock, so I reserved that and walked over there to buy their’s. Good thing I had reserved it because someone else wanted it. It was small, 250 grams.

Waitrose had masses of Monkfish, and large fillets. I bought 400 grams to make up my dish. So, Waitrose came up trumps, but a high premium. Sainsbury was £16 a kilo, Tesco was £20 a kilo and Waitrose £26. Quite a difference in price

My birthday was celebrated at Canaletto with Ian and Julie, and of course (well, she paid, too) Rosemary. Had a very good meal there, and a reasonable number of other people, considering it was a Tuesday evening, were also dining, My main course was Monkfish which set me thinking about serving Monkfish at home. I have cooked it before, but please read my next post, about my trials and tribulations buying Monkfish the follows nag weekend.

Visited Joan & David, Rosemary’s aunt & uncle, for lunch. We went for a short walk to see the new wildlife park that was being created along the River Rye, very near them. 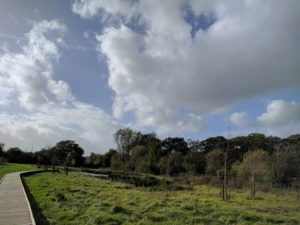 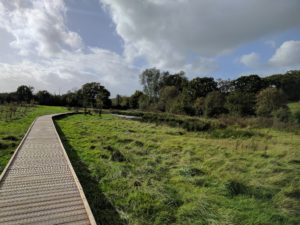 The reason we rushed back from Scotland was because we were booked to see a musical at the Waterside Theatre in Aylesbury. The show was a Small Faces musical called All Or Nothing. The touring play was about the early days of the Small Faces, their rise to fame and how they were ripped off by their various managers. We went with Ian, Julie, Ian, Judith and Sue.  The original reason we went because the grandson of a friend was starring as Ronnie Lane.  The musical was excellent playing many of the hit records from Small Faces and other 60s music. We learnt much about the Small Faces, which I “verified” on Wikipedia when I got home.  The music was loud and at the end the whole audience was standing, clapping and singing along to it. This gets my vote! Friend’s grandson……..Brilliant!