Today was the first full day. Rosemary wanted to see some talks in the Faraway Forest, and the talks at the Space Shed looked interesting. I had a few such talks planned throughout the day. I went to see a band play at the main Obelisk Arena. It was an Afro-Punk ban called KOKOKO!. Very interesting band and I was up close to the stage as not many people were watching. The members were all dressed up in orange boiler suits. After they had ended, went back to find Rosemary in the Faraway Forest. She was bitterly disappointed, the Space Shed talk was crap, and geared around kids. We hung around the area but decided not to watch any more of these Space Shed talks. Rather disappointed, ended up eating lunch and having something to drink.

Back at the Obelisk Stage, I watched Anna Calvi, from a distance and then close up. I do think they do add too much bass into live bands, which makes them rather difficult to record. Much of the video I took went blurred when the base came in. It vibrated the phone so hard.

Today was a showery day, we missed most of the rain, darting in and out of tents to listen to people, or to drink some beers.

While wandering around, we tried the Sunrise Arena where we had nice surprise and saw an Irish punk band The Murder Capital

During one rain period, R and I listed to Mystery on the Rocks, apparently a podcast. (Each week a new guest enters the bar and attempts to solve an unsolved real life mystery alongside the regulars. Hosted by Masud Milas, Chris Stokes, and Sooz Kempner.) This was their first live stage discussion. They take some crime mystery, in this case, the death of a man in a room in New York City in 1929, a classic locked-room mystery. They discuss the crime, trying to solve it while making and drinking cocktails and singing. Sounds weird, but it was quite an enjoyable

R and I went to see the band ‘She Drew The Gun’, unfortunately, this was unlistenable to because of the poor sound quality with overpowering bass. So we went off to prepare for George Ezra. Unusually the Obelisk Arena has a number of seated areas at the back where the oldies can sit. Managed to find a place to sit and watch George. The rain held off during most of the performance. It was a good show with fireworks at the end. One new feature of festivals these days are the volunteers who do the deaf and dumb signing of the song lyrics. How on earth can they keep up with the lyrics?? But they do and judging by various faces watching them, it is a very worthwhile service.

We walked back the campsite, over the bridge where moving images are projected into a water spray, and then back to Van Morrison on his pitch. Tired and I think Rosemary found it all a bit of a strain. 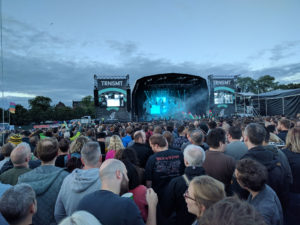 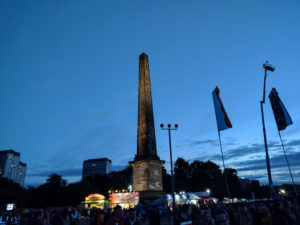 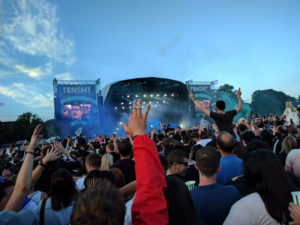