Visited Norwich for a couple of nights. The main purpose was to hear Liz sing in the Carol Service held at the Roman Catholic Cathedral of St John the Baptist. This was not a service, no prayers, just singing Carols. Some audience participation with popular carols. There were other obscure and complicated pieces which were sung exclusively by the choirs. The Carols service was performed by three choirs from The University of East Anglia. They are The UEA Choir, The UEA Chamber Choir and The UEA Community Choir.

During the day we walked over to the UEA buildings and visited the Sainsbury Centre to admire the sculptures on display, including an Antony Gormley. Spot it in the pictures!

We went for a couple of night to Norwich to see Bob, Lizzie and Ann. While there, we walked around the very local to them Eaton Park and sat on the new park bench which those at 410 had bought. 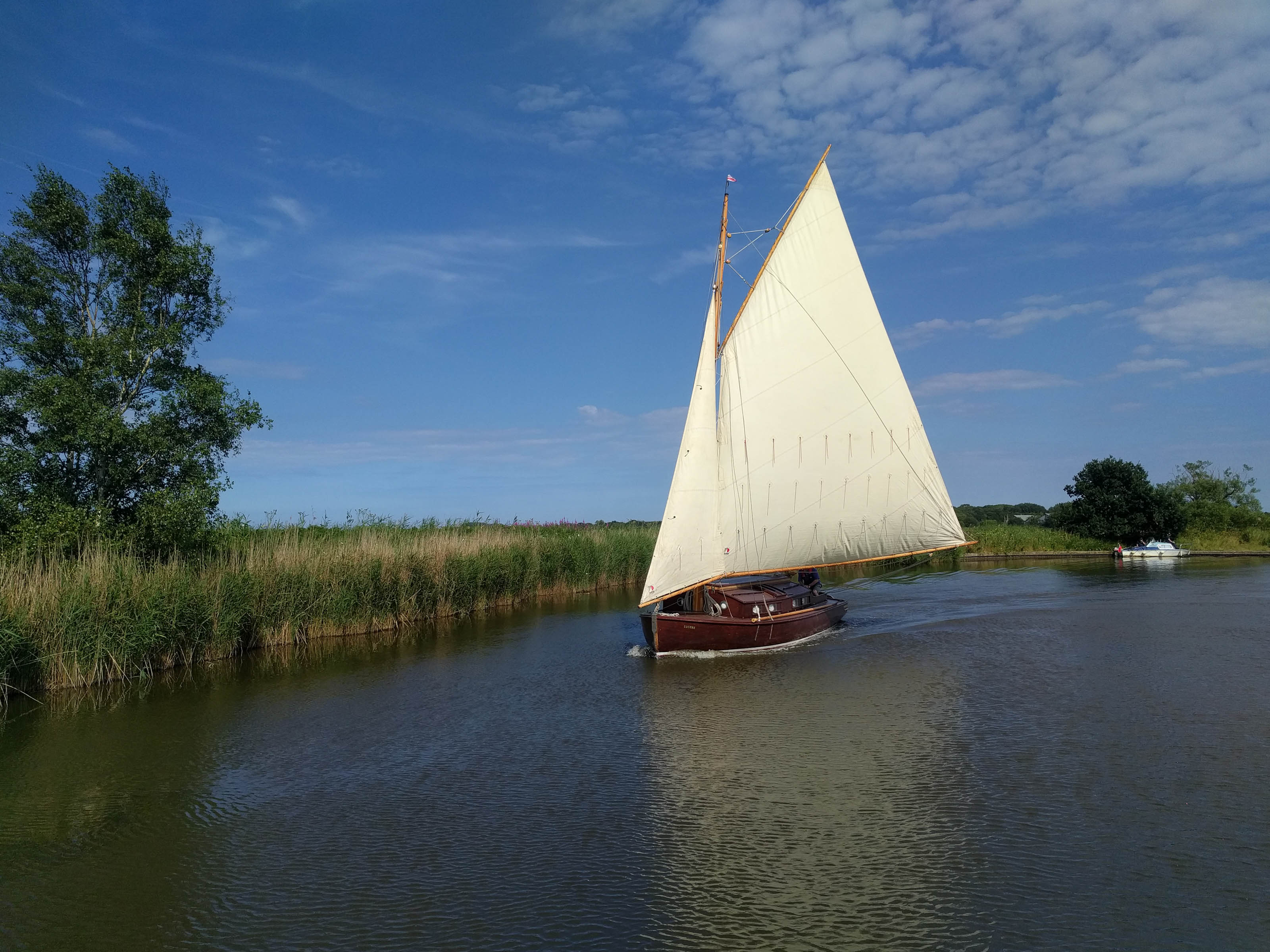 Rosemary and I visited Ann & Liz in Norwich for an amazing couple of nights. We took our own bed, Morrison the campervan, because the house was full with the residents plus Bob’s daughter and her son, who were also visiting.

The weather treated us well with yet more sun. Ann’s grass was brown from the drought, Earlham Park almost looked like a desert. Were the newly planted trees in the park going to survive? The cost of planting them versus then never watering them in the drought, was a tad odd.

On our second evening we went to watch an amateur production of Tomfoolery,(a musical revue based on the lyrics and music by American mathematician, songwriter, and satirist Tom Lehrer), at Sewell Barn Theatre. Very ably produced with magnificent performance from the cast. I soon understood the meaning of the many pigeon decoys scattered around the theatre. Only downside was the small theatre which was rather warm.

Earlier in the day we had gone to Martham Ferry Boat yard to see the work which Nick had been doing. He is building new electric day boats for hire, and of course hiring them out. We went for a cruise to Hickling Broad, then back and up to Horsey Mere. We were in one of his diesel-powered boats, all the electric boats having been hired out before we arrived. We did come across one of Nick’s electric boats; it glid silently past us like a ghost.

We visited Ann, Liz & Bob in Norwich and stayed a couple of nights.  On the drive over we stopped at Eaton Socon and had a coffee in a pub called The Rivermill.  This was a converted mill building on The Great Ouze. They were quite happy to serve coffee, In fact they seemed to have a morning coffee and-cake special running.  Rosemary was quite taken with some flats overlooking the river. Nothing was as we remembered it. We then drove past are old house, 183 Great North Road, which was still standing as was the Leylandii Hedge that I planted in the front in the late ’70s.

We stopped in the park by the river in St Neots and ate our picnic lunch before heading on to Norwich.  As we had plenty of time we stopped off at Grimes Graves.  These are prehistoric flint mines in the Brecklands.  I last visited then in the ’60s and Rosemary had never seen them.  You can still go down one of the mines.  There are a couple of others which have been excavated.  The landscape outside is Breckland grass, but here there are lots of round dips caused by the pits.  There are many pits which all apparently inter-join below ground.

On to Norwich where we all went to the theatre to watch The Play that Goes Wrong.  A comedy about a play that goes wrong from beginning to end.  This had been recommended to us. Amazing timing by the actors as scenery fell down around them. An audience member got to the stage of laughing where they just squeaked intermittently.

The next day, we raced off to my favourite online camera shop. I’d never seen the bricks & mortar shop. Later, we accompanied Bob on a walk to the local Waitrose via the club where he plays golf. Lovely scenery and very edible wild cherries. Expanding our local geography even further, In the afternoon, we took a walk in Eaton Park, where Liz jogs.  A huge park in Norwich which was created after the First World war.  It has a large boating pond, and tracks for miniature railways. Despite going to school in Norwich, I had never been to either place.

On the Saturday we returned via Cambridge for the Caius benefactors May week garden party where we met up with Richard and Andrea. (And yes, it was June, but that’s Cambridge for you.)

Nice weekend in Norwich with my Father and wife.  We all visited Welles, and saw the house which Rosemary used to visit as a child.