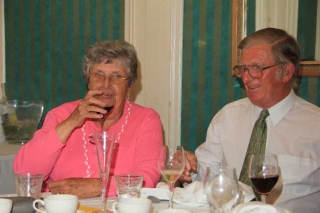 Rosemary and I went to the 50th Wedding Anniversary of her uncle and aunt.  The lunch time meal was held at The Chalk Lane Hotel, Epsom.  After an excellent meal we decamped to their house for cake and a whole other meal.

This week Rosemary and I have been on holiday.  This was the week to prepare for the wedding.  Many of those small jobs, which I have been meaning to do, were done this week.

Repainted the skirting boards on the stairs.  They had become so chipped over the years.

The chip paper on the ceiling in the living room, it was coming off.  Managed to stick the edges down and repaint.   But this was only a temporary solution.  It must all come off and be reapplied before it drops off one day.

The downstairs loo.  Well this was a real embarrassment.  One of the rooms that had peeling paint when we first arrived here 17 plus years ago.  We never touched it, and it was getting worse.  A quick blast with the sandpaper and several layers of emulsion sorted that out.  The room was almost respectable.

The new bench from the salvage yard in Oakly had been delivered and dropped by the drive several weeks before.  We could not move it on our own.  This week we painted it a nice Sage green, mustered a group of strong men from the Plough and Anchor and moved it to the brick area by the honey suckle.   I don’t believe anyone thought it could be quite so heavy.  No one is going to nick that bench.