Up early (5.30) to be picked up shortly after 6.00 by a very kind Neil for the trip to Lewknor on the M40 (Rosemary says is it off the M40) to catch the Oxford/Heathrow bus. Bitterly cold when we left, but no snow, although the drive to Lewknor did see a short snow drizzle. Arrived at the bus stop at about 6.40 in plenty of time for the scheduled 7.04 service. As we unloaded the bags, the late running 6.34 service appeared. We hopped on this bus and paid our fares. Good premonition for the holiday. We had not reserved seats because the closing time for booking these is 36 hours before the service runs. Need not have worried about booking, the bus was pretty empty.

The drive to Heathrow should have been quick, but for a couple of accidents, one before High Wycombe, and the other just after the M25 junction. M25 was empty. We were checking in at 8.00 for our flight, four hours before departure, this runs totally counter to my ethos. Now we have hours of boring hours sitting around waiting and drinking coffee from Café Nero. Maybe some harder stuff later.

Nope nothing harder, Qantus is pretty stingy with the wine and beers. Managed Bladerunner 2049 (again), Alien Covenant (rated 3-screamer, the last scream disturbed my fellow passengers) and Kingsman – Golden Circle. (Sorry Ravi, that glamping does not look like Love Fields. LF does not have beefy security guards, it is much more laid back.) There was also a slight incident opening a packet of crisps for Rosemary. (Did not expect to be showered by the contents when I banged open the inflated packet.) Wait in Dubai to re-board the aircraft. The long section to Melbourne is about to start. One hint for those flying Qantus in cattle class: ignore the flight attendants when they come around offering coffee, tea and soft drinks, demand the hard stuff.

Twelve hours later we arrived in Melbourne and had a drink of beer in the bar, before joining a 737 to Auckland.  Arrived in Auckland at 5.00 am. In the interests of eco-security, Rosemary had her walking boots whisked of her feet and soles washed. She was rather mortified by the experience. I merely had to walk over a disinfectant impregnated mat.

Caught the Sky Bus into Auckland city where we checked into the pre-booked Grand Windsor Hotel. Rather too smart for us. They allocated a room for us.  Prince of Wales Feathers everywhere, all to do with Duke & Duchess of Windsor, so a picture of jewellery in our room. I am going to ban excess cushions. We showered and went for breakfast.

Rosemary and I met up with Simon, Ravi and Maggie in Oxford one Sunday morning. We were not able to park in the usual Pear Tree park and ride, it had been taken over by gypsies who have now moved on to the Bicester park and ride.  First we had English breakfast with beer at the Jam Factory. Then we worked off the excess calories with a walk to see where Simon used to live with his parents. After visiting the house  we walked through the university park and along the river Cherwell, stopping for refreshments at the Angel and Greyhound pub.

After our visit to Stoneywell, we visited Abbey Pumping Station.  This  pump was built to pump Leicester’s sewage away for treatment. The pump has been preserved and has steaming days when it is worth visiting.

As well as the pump there is a museum featuring items from Leicester’s industrial past. There is also a display on how sewers work, which amused children for hours as they flushed a model turd down the loo and through the sewers.

The next day we went back to Abbey park where there is a ruin of an Abbey. Coffee in the pavilion teas shop. 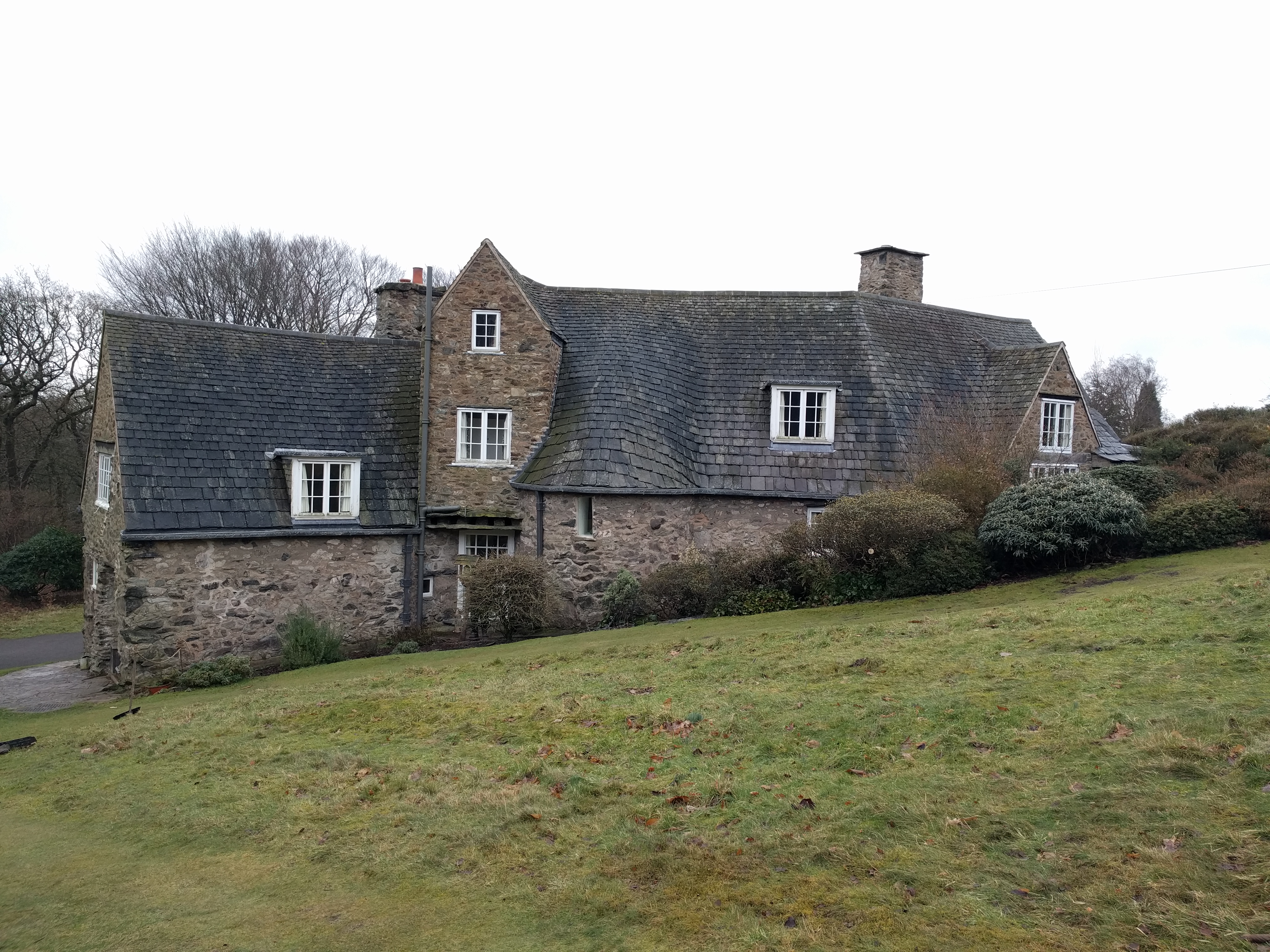 We had an excellent trip to Stoneywell National Trust House. The weather could have been a little better.

Lovely little National Trust house, with  fabulous gardens. First off, you must book to come here, you can not just turn up. This is because of planning regulations and limited access. The car park is a little way off from the house, a mini bus will pick you up and ferry you to the house.  They were waiting for us in the car park. The same on return.

You see the house with a guide in small groups. There were four in our group. The house was built of stone in 1899 and was originally thatch. After a fire the home was re-roofed in slate. The house is built into the rock of the nearby hill. The house is also a built as a zigzag,  is not straight, it has no square walls, no right angles to be seen anywhere. Much of the furniture is original.

Up in the stables there is a small cafe where you can sit inside or outside. Alas we visited on the most miserable and cold day of the year, and we decided not to sit outside, and we also gave most of the garden a miss. We were told it was planted so there were some flowering plants at all times of the year. We did see snowdrops.

We definitely must go back on a warmer dryer summer day and see it when we can relax in the garden.

The staff were amazingly pleasant and informative about the history of the house. While we waited for the bus to take us back we had a great conversation with them.