Good day in Edinburgh, production system configured at client. One new error found while testing. Should have that sorted on Monday, and delivered.

Ended up with time to spare, so have bought a coffee and a chocolate muffin from Cafe Nero. Yes a Cafe Nero has opened in Edinburgh airport, and they stamp your loyalty cards. Costa you have to change.

Now a long wait, was not able to change my flight to the 6.00 pm. The last seat had gone.

I feel a complaint coming on. I am on my way to Edinburgh from  Luton. Because of the totally crappy bus service from the mid term car park I choose to walk. Now it is an obstacle course with fences in the way. I had to cross the road and scramble over a fence.

I understand what they are doing, keep the traffic moving. They have it wrong though, sort  the entrance to the short term, and eradicate drop offs. Put a decent walk way in from the mid term for our sanity. 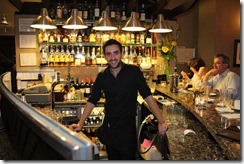 Up and off to work, no rain today.  Today I went for supper at the Petit Paris and ate their special pre 7.00 pm value meal.  Terrine to start with, and then tuna for the main course all washed down with a few glasses of vin de rouge.

Forgot to mention, I was proffered a glass of Kir Cassis on entry, a gift for a returning customer.  Very thoughtful.  Good meal.  I will be returning.  I see they have a special fondue evening next Tuesday.