We met Andrea, Richard and Jon at Claydon House. After we arrived, we all walked to the cafe and had a quick meal, before having a tour of the house. Much of the house was under repair because of serious cracks in the ceilings. Furniture had been removed and stored in other rooms. It was likely to become worse before getting better. After the tour, we went home for supper and copious amounts of whisky.

Saturday we met up with Ravi and Simon, plus his daughter & her family. We found Ravi, Simon and family in the Peoples Vote March. I heard Caroline Lucas giving a supportive Remain talk. There were a few leave people giving the Remainers a hard time.

Afterwards, we went to the Branca Restaurant for a good lunch and then a walk around University Park.

Rosemary and I visited the Bucks County Show. First stop was breakfast, we bought some sausage rolls in the food hall. Not very good!

We wandered around looking at all the stalls and animals. Enquired about new lawnmowers, electric vehicles. DB Guns had a good display of old guns, and guns which had exploded because of blocked barrels.

The cattle were on show, all groomed looking clean and glossy. The judges walking amongst the cattle marking up their notes and discussing which animal was to be the winner.

There were the Vegetable, Flowers, Cake, Handicraft and Photography competitions. Some huge leeks and nice looking cakes.

The sheep sheering exhibit was there. I know it is a bit corny but was interesting to hear about the old breeds, why they were bred and why some were successful and others not successful in modern times.

It was Reading Festival time, the weather was glorious on Thursday, and remained sunny and warm all weekend.

I set off in a good mood, soon arriving and entering the campervan area. Was shown a place to park, and introduced myself to my neighbours. Off I walked to get my wristband, and this is where it all went pear-shaped. Apparently I did not have a ticket, I had all the other bits, including the ticket which said it was not a ticket. I then spent hours on the phone to Ticketmaster, had help from the camping site manager in trying to negotiate entry. Even my neighbours got involved and cooked me lunch. It all came to no resolution so I eventually left in the evening after all avenues had come to dead ends.

Moral of the story, check your tickets beforehand thoroughly. I had checked. I saw the campervan parking hanger, and the printed strip of tickets, but what I did not see (apparently) was the actual ticket. The strip of what I now know not to be the tickets, was the receipt, notification of the campervan parking, but no actual ticket. R wanted to know whether in future this meant we should video opening any envelope from Ticketmaster, so as to prove whether or not they sent any actual tickets.

I lodged an appeal. Got nowhere.

The Folk Festival is over, even the breakfast van was not doing full breakfasts. The queues at the shower block were non-existent as many people had left overnight. By the time I left, the site was nearly empty. I was heading out to Balsham to an open garden event organised by Simon’s brother. He had opened his garden where there is a complex yew maze. “The maze was planted in 1993 and forms the shape of a treble clef. The maze may be completed in several ways: 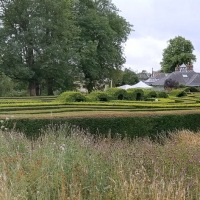 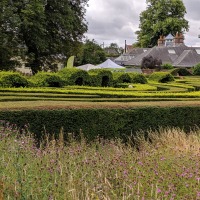 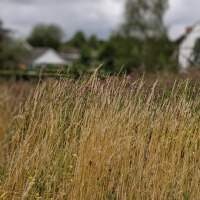 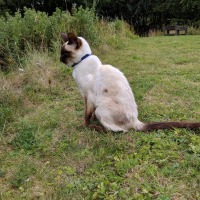 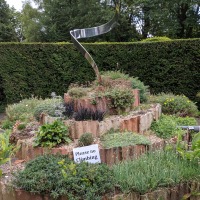 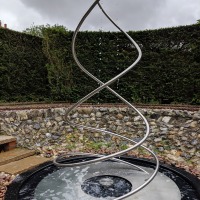 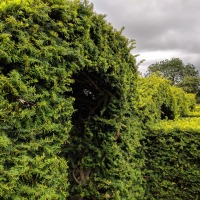 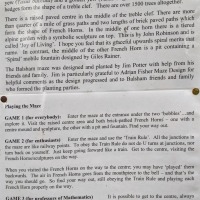 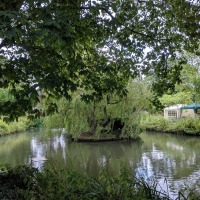 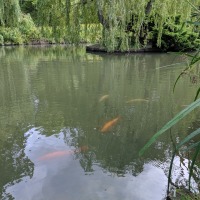 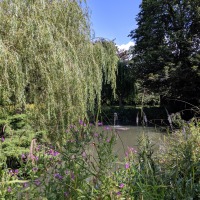 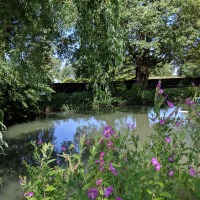 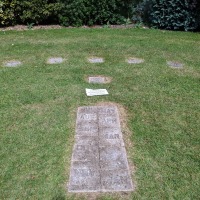 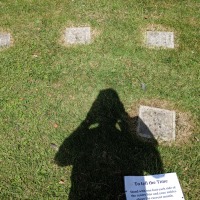 Last day at the Folk Festival. I was on my own most of Sunday. Richard and Andrea appeared after visiting Simon’s brother’s garden. Though we did separate again as my musical taste was different from their’s. Was a good day with a couple of bands I really enjoyed, Imarhan from Algeria playing some Desert Rock, and Jimmy Reed playing the blues.

“Roo Panes “has been described by Uncut as a ‘Britfolk pin-up’”. A bit too folky for me.

“Folk music’s legendary triumvirate of musical magpies Mike McGoldrick, John Doyle and John McCusker are out on the road again in 2019. As winter turns to spring Mike, John & John will wrap up their stint on Transatlantic Sessions for another year and bring you their own blend of top-class folk songs, tunes and charming bonhomie.”  Again, a bit on the folky side for me.

Imarhan is an Algerian Tuareg desert rock quintet formed in 2006, in Tamanrasset, Algeria. Their first and eponymous album was released on German record label City Slang in 2016. I loved their music, they were on a tour of the world.

“Storytelling is something of a Texas tradition. Tall hats and even taller tales are woven into the fabric of The Lone Star State, and singer-songwriter, Jarrod Dickenson can spin a yarn with the best of them. Hailing from Waco, now based in Nashville via Brooklyn, Dickenson spends most of his time on the road bringing his own particular brand of soulful Americana to a wide variety of music-loving audiences around the globe.”

Next on was Lil’ Jimmy Reed, playing the blues. One of the original Louisiana bluesmen. At 80 years old he navigated the steps on and off stage with dexterity. He was accompanied by Bob Hall and Bob’s wife Hilary Blythe playing bass. Excellent!!

“Bound together by lifelong friendship and shared experience for more than 25 years, The Fisherman’s Friends met on the Platt (harbour) in their native Port Isaac to raise money for charity, singing the traditional songs of the sea handed down to them by their forefathers.”